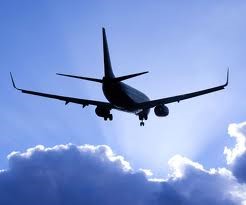 October 28, 2016 (Spring Valley) — The Federal Aviation Administration is hosting a meeting in Spring Valley Tuesday on a proposal to change flight paths to both Lindbergh Field and Brown Field airports, which could sharply increase airliner traffic over East County.  The meeting will be at La Presa Middle School, 1001 Leland Street, on November 1 from 6 to 9 p.m.

“Please let everyone you know about the meeting. It is my opinion that we may be due for many more airplanes over our community in the future if the FAA doesn't get good input,” says Lora Lowes, Chair, Spring Valley Community Planning Center.

The FAA says the goal is to improve air safety and efficiency as part of the Southern California Metroplex project, which will replace many conventional air routes with satellite-based routes. But after Point Loma residents raised concerns over more jet noise over their community, the FAA rejected that proposed route.

If East County residents want to avoid increased air traffic, noise and pollution over local neighborhoods, it’s important to attend, bring neighbors and speak out at the public meeting on Tuesday.

Air traffic can also pose serious safety concerns for residents, as when the PSA midair collision crashed into homes in a North Park neighborhood back in 1979.

A reader of ours has provided additional info:

You can see flights at http://webtrak5.bksv.com/san Looks more likely to effect Spring Valley and Casa de Oro than other East County areas. And this presentation shows San Diego around the 27th minute. https://www.faa.gov/nextgen/communityengagement/socal/ or

https://youtu.be/qCRNPeCzgyg?t=27m30s or  (link under past sessions)

While that's geographically true the unincorporated areas such as Spring Valley are under control of Supervisors,not the city of San Diego, so have more in common with Campo or Jamul than Diego.  The inland areas are also different weather-wise than the coastal communities.

The Uniion-Tribune has long included areas such as Spring Valley and Mt. Helix in its  East County section--all the unincorporated areas as well as the incorporated cities of  La Mesa,  El Cajon and Santee.

For us, we chose a simple definition:  We cover the inland region east of I-15.

We do have community sections, for those who didn't find them yet:

Spring  Valley is in the rural section (part of it is rural, though part is urban ie Casa de Oro).

Anyhow if people just want local news in their area,  they can find it.

When I flew from Texas to San Diego the aircraft began the descent over ARIZONA. I could see Yuma, the Colorado River, El Centro, El Cajon, and finally San Diego.