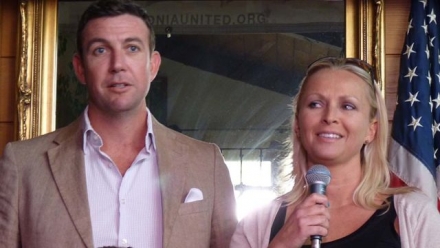 Photo:  Rep. Duncan D. Hunter and his wife, Margaret, are seen in La Mesa at the 2014 Polosia United event for Polish-Americans in the San Diego region. Margaret is the oldest daughter of Steve and Miroslawa Jankowski, a couple who moved their two daughters to America in the late 1980s, escaping “the bleak landscape of communist Poland,” according to Steve Jankowski’s 2010 obituary quoted by The San Diego Union-Tribune.  Photo by Miriam Raftery

June 14, 2019 (San Diego) - Downtown attorney Jeremy Warren had work to do Thursday, but he took time to comment on what transpired in the federal courthouse a few blocks away.

Hunter changing her plea to guilty in the corruption case enveloping herself and her husband, Rep. Duncan D. Hunter.

“This deal gives her an excellent chance of not going to jail as long as she continues to cooperate against her husband,” he tweeted several hours after the 9-minute morning hearing.

Federal prosecutors recommended in a plea agreement that she get a far lighter sentence than the 5-year maximum for the single count she admitted. (She also confirmed that the couple illegally spent $200,000 in campaign funds on personal goods and travel).

The deal Hunter signed Tuesday drops her sentencing range into Zone B of the federal guidelines, Warren told Times of San Diego in a phone interview.

“That puts her in a range where the judge has a lot of discretion … to give her eight months,” which can mean eight months in prison, home confinement or a halfway house — or some combination.

The government is asking for a “five-level downward departure” from federal guidelines — an unusual move, Warren said.

“What’s unusual is that they’re doing it up front,” he said, instead of waiting until later, when the 44-year-old Hunter may testify against the father of her three children.

“Even if she signed a traditional plea agreement (with no prosecutor advice on sentencing), and testified against her husband … she almost certainly would get that kind of departure,” Warren said. “Probably would not be facing time in jail. Or very minimal.”

Normally, prosecutors don’t like to suggest a light sentence in a plea deal.

“At trial … the congressman can cross-examine her: ‘Look at this huge break you’re already getting,'” Warren said.

Second, prosecutors generally like to evaluate their witness’ help at the end — “to see how good it was or how good it wasn’t. It’s a little bit unusual in our jurisdiction to have that up front. It means they’ve already debriefed her.”

But he said most judges, in particular Judge Whelan, “kind of use them pretty religiously.”

Points help determine prison time — “the more points you have, the more time in jail,” he said.

Under Hunter’s plea agreement, “there’s a little bit of wiggle room there — like a 2-point disagreement.”

In this case, prosecutors started her at 16-18 points, and signaled a five-level downward departure for cooperation.

“Five levels is a pretty significant reduction that takes her from 2-3 years down to about eight months for the low end,” he said.

Hunter’s lawyers are hoping for no prison time, Warren said.

But with the plea agreement signed, she may be limited in what she can ask for later, which puts “all her eggs in the prosecutors’ basket.”

At the end of the day, it’s ultimately up to Whelan, he said.

“So even if the parties recommend no time, he can give up to five years in prison,” he said. “And vice versa — ‘I’m not sending her to jail.’ But this judge tends to follow the guidelines.”

The plea agreement doesn’t specify restitution, but her crime — “conspiracy in violation of Title 18, United States Code, Section 371” — allows for a fine for $250,000.

The deal says: “The parties have no agreement as to any fine that may be imposed.”

Warren says law holds that every defendant has to pay a fine unless the court finds they are indigent. A mandatory special assessment of $100 is noted in the agreement.

But “in our district, the court rarely imposes a fine,” he said.

Kinda figured this was gonna happen. Should be enlightening to see the end results when all is said and done. Duncan Hunter (maybe even his wife - or soon to be ex) could be vacationing at a less than desirable "Hotel" very soon.
Why don't you wait for Due Process GP!