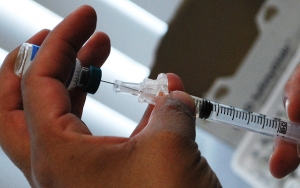 By Tom Christensen, County of San Diego Communications Office
November 1, 2019 (San Diego) - Flu activity saw a slight decline in the County this week with 30 lab-confirmed cases, the County of San Diego confirmed yesterday, Halloween: six fewer than the number of cases reported last week. That brings the 2019-20 flu season total to 362 cases, compared to 130 at this time last year. County public health officials continue to emphasize the importance of getting the flu vaccine. There have also been two deaths so far this flu season.
The two formulas approved for the 2019-2020 flu season by the Centers for Disease Control are Fluzone High Dose, manufactured by Sanofi Pasteur, and Fluad, manufactured by Seqirus. Rite-Aid and CVS offer the 2019-20 flu vaccine, according to google.
“The flu season can be unpredictable,”  said Wilma Wooten, M.D., M.P.H., County public health officer. “We’re seeing relatively low flu activity right now, but it’s still almost triple the cases for last year and it’s fairly early in the season.
“Everyone should be getting their flu shots to not only protect themselves, but their family, friends and co-workers as well.”
Last season, 77 people in the region died from complications from the flu, and 9,655 lab-confirmed cases were reported. That was down from the previous season’s 343 deaths and 20,833 lab-confirmed cases.
The County Health and Human Services Agency publishes the Influenza Watch weekly report, which tracks key flu indicators and summarizes influenza surveillance in the region. The report is released every Wednesday during the flu season.
For the week ending Oct. 26, 2019, the Influenza Watch report shows the following:
Emergency department visits for influenza-like illness: 3 percent of all visits (compared to 3 percent the previous week)
Lab-confirmed influenza cases for the week: 30 (compared to 36 the previous week)
Total influenza deaths to date: 2 (compared to 0 at this time last season)
Total lab-confirmed cases to date: 362 (compared to 130 last season)
Your Best Shot Against the Flu
The Centers for Disease Control and Prevention recommends that everyone 6 months and older get a flu shot every year. It takes about two weeks for immunity to develop.
Flu vaccination is especially important for people who are at high risk of developing serious complications from influenza. They include:
People with chronic medical conditions like asthma, diabetes and lung disease, even if symptoms are under control
Pregnant women
People 65 years and older
People who live with or care for others who are at higher risk
In addition to getting vaccinated, people should also do the following to avoid getting sick:
Wash hands thoroughly and often
Use hand sanitizers
Stay away from sick people
Avoid touching your eyes, nose, and mouth
Clean commonly touched surfaces
If you are sick, stay home and avoid contact with others
The flu vaccine is available at doctors’ offices and retail pharmacies. If you don’t have medical insurance, you can go to a County public health center to get vaccinated. For a list of locations, visit www.sdiz.org or call 211 San Diego.