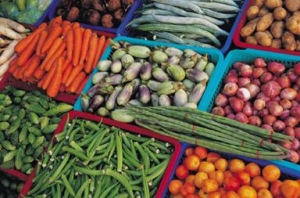 Eric Larson, Executive Director of the San Diego County Farm Bureau, told us, “The immediate impacts in San Diego County are to cattle ranchers who have insufficient grass for grazing and fruit tree farmers who are having to buy water because of the shortage of rainfall.”

The State Water Project has said that for the first time ever, it is cutting off water deliveries for farmers and cities statewide.  Larson says that fortunately, these cuts won’t affect San Diego County farmers at this time, since the Metropolitan Water District and the County Water Authority still have enough water in storage or available from alternative sources to make it through this year.

But local growers say if we don’t get more rain soon, they wil have to pass along higher water costs to stores for items such as fresh fruits and vegetables.

Coast Citrus Distributors told 10 News that it expects to be buying less produce from farmers in the Central Valley, where the drought has hit the hardest. That could mean higher costs to get produce from somewhere else—and it could be lower in quality.

Baha Award, a buyer for Coast Citrus Distributors, said costs could double or even triple.

Local distributors are looking for more farmers to help them meet demands and prevent a shortage of fresh fruits and vegetables for their San Diego County consumers.

Californians may also soon be paying more for wine.  Drought-stricken vintners in Napa Valley say that if rains don’t come soon, they’ll be forced to plant and irrigate fewer vines, which could force prices up.  What impact drought and rising prices for wines from California’s dominant wine making region  may have on San Diego’s wine-growing industry remains to be seen.