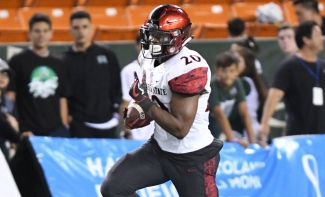 Penny led the way with runs on all six plays of a 99-yard drive when the Aztecs (7-2, 3-2 Mountain West Conference) broke away early in the fourth quarter.

The Rainbow Warriors (3-5, 1-4) struggled to establish their running game. Diocemy Saint Juste had two 200-yard rushing games coming into Saturday, but was contained to just 40 yards on 17 carries by the Aztecs defense.

San Diego State jumped to a 14-0 lead with Juwan Washington's 1-yard run late in the first quarter and Christian Chapman's 16-yard pass to Mikah Holder early in the second.

Dru Brown cut the deficit to 14-7 on a 1-yard keeper for Hawaii in the final minute of the first half.

The Aztecs remain on the road for next week, but are back in California, visiting San Jose State.  Kickoff on Saturday is scheduled for 7:30 p.m.