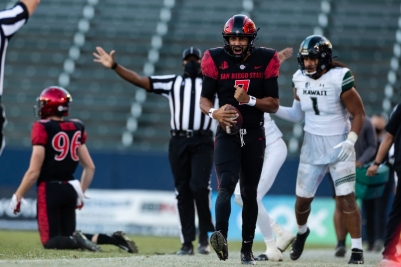 The Bulldogs (7-2, 4-1 Mountain West) raced out to a 20-0 second-quarter lead as they picked up their second win against a ranked team this season. Fresno State had 485 yards of total offense, ending San Diego State's 29-game streak of holding opponents under 450 yards.

Haener completed 25 of 42 passes for his sixth 300-yard game this season. After Evan Williams picked off Lucas Johnson and returned it 36 yards to the San Diego State 31, Haener connected with Keric Wheatfall for a 16-yard TD just inside the left pylon 43 seconds into the second quarter to give the Bulldogs a 14-0 advantage.
Mims had his second straight 100-yard game and became the first running back this season to hit the century mark against the Aztecs. The senior had 97 yards in the first half, including a 13-yard score with 3:53 remaining in the first quarter to cap a 15-play, 86-yard drive.
Mims also had a 15-yard touchdown during the fourth quarter to extend Fresno State's lead to 30-13.
San Diego State (7-1, 3-1) came into the game second in the nation in third-down percentage defense, fourth against the run and fifth in total defense, but it struggled to keep pace. Fresno State converted 9 of 18 third downs and went three-and-out only three times in 13 drives.
Johnson had 280 yards of total offense. The senior quarterback was 14 of 31 for 220 yards, a TD and two interceptions along with 60 yards rushing. Greg Bell, who came into the game third in the Mountain West in rushing, was held to 63 yards on 15 carries.
The Bulldogs extended their lead to 20-0 on a pair of field goals by Cesar Silva before the Aztecs got on the board late in the second quarter on Tyrell Shavers' 19-yard TD reception.
Silva kicked his third field goal with four minutes remaining in the third quarter to put Fresno State up 23-7 before San Diego State responded with Bell's 3-yard TD. The 2-point conversion failed, leaving the Aztecs trailing 23-13 going into the final 15 minutes.
After Mims' second touchdown, Will Haskell — who replaced Johnson — had a 7-yard run to get the Aztecs within 10 points with 1:06 remaining.
HIGHLIGHT WORTHY
San Diego State cornerback Dallas Branch appeared as if he was going to intercept Haener's long pass intended for Josh Kelly during the second quarter, but the Bulldogs' sophomore receiver was able to snag it at the last second and went 69 yards. It was Fresno State's second-longest play this season and it led to Silva's first field goal.
POLL IMPLICATIONS
San Diego State's four-week stay in the rankings is likely to end with this loss. However, Fresno State could re-enter for the second time this season. The Bulldogs moved into the Top 25 after a victory over then-No. 13 UCLA on Sept. 19.
THE TAKEAWAY
The Aztecs committed three turnovers after having one or none in six straight games. The two interceptions and one fumble led to 15 Fresno State points.
UP NEXT
San Diego State plays at Hawaii next Saturday.
Box
Postgame notes
Postgame quotes