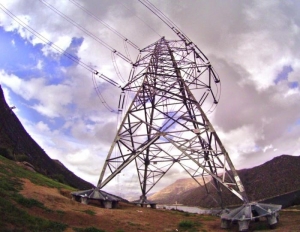 September 30, 2014 (San Diego’s East County) - The Forest Service will host a public meeting on SDG&E’s proposed power line replacement projects and how those may impact Cleveland National Forest. The meeting will be on Wednesday, October 1st in the Alpine Community Center, 1830 Alpine Boulevard in Alpine, from 5 to 7pm.

The website Backcountry Voices notes that Southern California is one of the most renewable-energy rich regions in California—and its also what residents are calling “ground zero for the San Diego backcountry.”

According to SDG&E, the five-year project, spread across roughly 880 square miles in eastern San Diego County, will make the transmission system more reliable and reduce the risk of wildfire. However, the $418 million project is drawing criticism from some environmentalists and residents who fear this could be a first step in a grander plan to eventually increase the amount of power that could be carried by the lines.

Two representatives of the Protect Our Communities Foundation, an environmental group that formed during the Sunrise Powerlink debate several years ago, told Administrative Law Judge Jean Vieth  that they don’t believe the goal of the project is only to replace decades old transmission lines and make them resistant to fire.

Some critics cite high costs to taxpayers of transmitting energy from remote desert wind and solar projects over the lines.

San Diego Gas & Electric Company  is proposing to combine over 70 existing special use permits for SDG&E electric facilities within the Cleveland National Forest into one Master Special Use Permit to be issued by the United States Forest Service As shown in the Project Location Map, the study area is located within the Trabuco Ranger District in Orange County, California and the Palomar and Descanso Ranger Districts in unincorporated areas of San Diego County.

In addition to requesting Forest Service authorization of the permit allowing for the continued operation and maintenance of SDG&E’s existing electric facilities within the national forest, SDG&E is replacing certain existing power lines and distribution lines in and near ethe forest.  The proposed Power Line Replacement Projects would primarily include fire hardening along with relocation and undergrounding of certain facilities across many rural areas in East County.

The Forest Service has reviewed the application and accepted the proposal with modifications to “certain actions” on National Forest System lands. Modifications to the federal proposed action were made in response to suggestions from the public and agencies during scoping, and by the cooperating federal agencies.

In order to help affected communities understand the safety and environmental impact, and to explain how the public can comment on the CPUC, the Forest Service is holding the informational meeting on October 1 at the Alpine Community Center. 2014. Residents of the backcountry, who will be most impacted by the projects, are encouraged to attend.