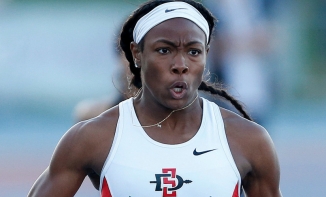 Henderson had the best time out of 24 runners in the first round Thursday evening with a wind-aided time of 10.91 seconds (+3.0). She followed up that performance by finishing in third in the semi-finals earlier Friday evening with a mark of 11.03 seconds (+1.5).

Approximately two hours later, Henderson, competing in a SDSU uniform, set her new personal best time of 10.96 seconds (+0.6). This bested her previous record of 10.98, which was set at the Desert Heat Classic in Tucson, Ariz. on April 28th. Henderson took second to LSU’s Aleia Hobbs, the 2018 NCAA Champion, who ran a 10.91.

Henderson will be competing in the 200 meter dash Saturday at 11:35 a.m. PT. She set a PR in that event two weeks ago at the NCAA Outdoor Championships in Eugene, Ore. with a time of 22.49 seconds.

Lisa-Anne Barrow advanced to tomorrow’s finals in the 400 meter dash at the Barbados Track & Field Championships… Former Aztec Whitney Ashley (Class of 2012) finished in tenth in the discus throw Thursday evening with a mark of 183’ 9” (56.01m).