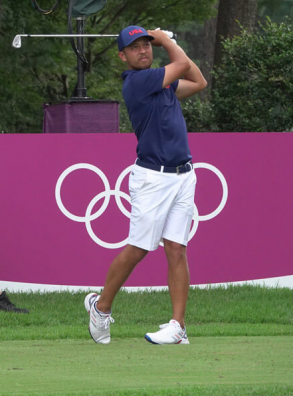 August 1, 2021 (Kawagoe, Japan) - Former San Diego State men’s golfer Xander Schauffele captured the gold medal in the men’s individual stroke play event at the 2020 Tokyo Olympics Sunday at the par-71, 7,447-yard Kasumigaseki Country Club. Representing the United States, Schauffele carded a 4-under 67 in the final round and finished the four-day event at 18-under 266, one stroke ahead of Slovakia’s Rory Sabbatini.

Competing in his first Olympics, Schauffele became just the fourth men’s golf player to capture a gold medal in Olympic history and the second American, joining Charlie Sands in 1900. The other gold medal winners in the event include George Lyon (Canada) in 1904 and Justin Rose (Great Britain) in 2016.

Schauffele vaulted into the lead after an 8-under 63 in the second round on Friday following an opening round 3-under 68. He then birdied the par-4, 500-yard 18th hole on Saturday to card another 68, maintaining a one-stroke lead over Japan’s Hideki Matsuyama at 14-under.

In Sunday’s final round, Schauffele opened with consecutive birdies on the par-4, 411-yard first and the par-4, 381-yard second. He then birdied the par-5, 640-yard fifth and the par-5, 586-yard eighth to log a 4-under 32 front nine. After five consecutive pars, however, Schauffle bogeyed the par-5, 625-yard 14th following a wayward tee shot. Schauffele rebounded with a birdie on the par-4, 343-yard 17th and then hit a dart on his third shot on No. 18 before making a 3-foot par to secure the win for the United States.

Schauffele was a third-team All-American in 2015 from both Golfweek and GCAA at SDSU, while also finishing as a three-time all-Mountain West selection and seven-time MW Golfer of the Week. He finished his three-year Aztec career with two individual titles, 16 top-5 finishes and 21 top-10 showings. Currently the fifth-ranked player in the world, Schauffele has won four times over his career on the PGA Tour.