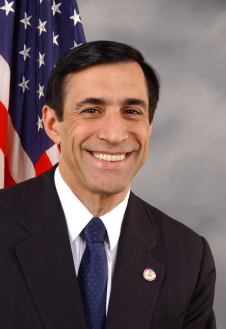 “I have received such a tremendous outpouring of encouragement from supporters inside the district, and around the state and across the Nation,” Issa states on the website.

Issa  once delivered a response to President Obama’s State of the Union speech in 2011.  Among other things, Issa stated, “You know, it doesn't take a genius in the private sector to know that you can save literally hundreds of billions of dollars in federal spending if you can make it more responsive. That's the main job.”

The Republican Congressman was best known on Capitol Hill for leading numerous investigations into the Obama administration, former Secretary of State Hilary Clinton and Attorney General Eric Holder as chair the House Oversight and Government Reform Committee. But his record has drawn controversy and even allegations of corruption.

One of  those investigations landed him on the “Most Corrupt Members of Congress” report compiled by Citizens for Responsibility and Ethics in Washington in 2012, ECM reported at the time. According to CREW, Rep. Issa illegally disclosed information from a sealed wiretap by inserting it into the Congressional record, then hid behind his constitutional protections as a member of Congress to avoid the consequences.  The bipartisan report that year named 7 Democrats and 13 Republicans.

“Rep. Issa not only pursued a politically motivated witch hunt against Attorney General Eric Holder, he broke the law while doing it,” said CREW Executive Director Melanie Sloan. “Nothing better illustrates the American people’s disgust with Congress than a member like Rep. Issa who claims to defend the law, but then places himself above it to suit his political agenda.”

Issa is among several prominent names running for the seat held by Hunter, who goes on trial in January on 60 counts of federal corruption charges including spending campaign funds on a lavish personal lifestyle and falsifying reports to hide the thefts. The trial commences after the December filing deadline to run for office but thus far, Hunter has stated he has no plans to resign. If convicted, he could face years in federal prison. HIs wife, Margaret, has pled guilty to one count of conspiracy and is cooperating with prosecutors.

Issa, like Carl DeMaio, another prominent Republican in the race, does not live in the district, which is not required in federal races.  Other declared candidates include El Cajon Mayor Bill Wells and former Escondido Mayor Sam Abed, both Republicans, Democrat Ammar Campa-Najjar, and independent candidate Helen Horvath.

Issa retired after redistricting made his 49th Congressional district a political battleground due to political registration shifts.  The 2018 election was won by Democrat Michael Levin.

According to Roll Call,  Issa was the wealthiest man in Congress for a decade and has a net worth of $283 million, making him capable of largely self-funding his campaign.

During his 15-year tenure in Congress, Issa authored 16 bills that became law, according to Govtrack. Most were minor measures dealing with naming post offices and a Border Patrol station. Another eliminated reporting requirements for numerous government agencies. Two others authorized transfer of lands to the Pechanga band of Luiseno Mission Indians.

Issa, son of a Lebanese-American immigrant, made his fortune largely in a car alarm company that he founded.  He served in the Army in a bomb disposal unit for three years, receiving a hardship discharge after his father suffered a heart attack.

After his discharge Issa was charged with car theft but the charge was dismissed by a judge. He was later convicted of carrying a concealed weapon after an officer found a gun in his vehicle following a traffic stop, according to the New Yorker, which raised other troubling issues from Issa’s past.

During his final year in Congress, GovTrack reports, Issa received a 90% rating from the U.S. Chamber of Commerce, 80% from FreedomWorks, 9% from the American Civil Liberties Union, and 3% from the League of Conservation Voters.

If Trump supports him, he can't be good for our country.