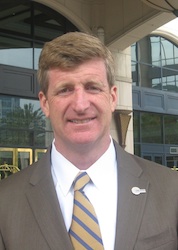 Kennedy addressed new strategies on marijuana to San Diego officials and community leaders on July 1.  Project SAM is a new marijuana policy initiative based on public health. The organization is a bipartisan alliance of lawmakers, scientists, and other concerned citizens who want to move beyond simplistic dichotomies of “incarceration versus legalization” and instead focus on practical changes to marijuana policy that neither demonizes users nor legalizes drugs. This approach uses science, public health, and public safety principles to guide marijuana policy.

He gave an overview of the project and then participated in a Q & A.

Project SAM has four goals: 1) to inform public policy with the science of today’s marijuana, 2) to reduce unintended consequences of current marijuana policies, such as lifelong stigma due to arrest, 3) to prevent the establishment of “Big Marijuana” and a 21st century tobacco industry that would market marijuana to children, which could result from legalization; and 4) to promote research on marijuana in order to obtain FDA-approved, pharmacy-dispensed cannabis-based medications.

When someone suggested addressing misuse of prescription drugs and talking with doctors, Kennedy replied, “That is a fantastic idea.”

In a recent UT-San Diego editorial article, Kennedy stated, “In Congress, I voted many times to allow access to medical marijuana. Those votes reflected my early, uneducated views. I never looked too closely - I didn’t realize ‘medical marijuana’ was the Trojan horse for legalization.” He explained, “Since leaving Congress, I have focused on promoting brain research to find better treatments for mental illness and other neurological disorders. I’ve learned from experts...The more I’ve learned about how the brain works, mental health and addiction, the stronger I feel we must engage in a smarter dialogue about marijuana policy…” (http://www.utsandiego.com/news/2013/jun/28/tp-pushing-a-health-first-app...).

Kennedy participated in an exclusive interview with ECM.

Asked when he started SAM, he said, “After the 2012 election, when two states voted to legalize marijuana - Colorado and Washington. Initially, I thought medical marijuana was harmless. We need to slow down before rushing into anything.”

We also asked about the pill vs. smoked forms of marijuana:

Q: Studies have shown that the pill lasts longer and does not have certain risks of smoking marijuana. Other findings suggest smoking provides faster relief. Also, one use of marijuana is to ease nausea, such as in chemotherapy patients, who may have difficulty holding down the pill. Why shouldn’t doctors have a choice of which form to prescribe - the pill or smoking based on their patients’ needs?

A: Physicians ought to have that authority. Frankly, medical schools don’t give the proper training...Using the legitimate need of people and tragically exploiting it for recreational use -- we need to guard against it. We also need to take a bigger picture of the inventory; do the risks outweigh the benefits? We need to know what studies show so we know what the consequences will be. The end result is that kids are using it, there’s a greater availability, perception of harm reduced, permissibility, and then more kids use it.  If we know all these facts, we might be more reluctant to embrace this as an answer to anything.

For more information about Kennedy and Project SAM, visit: http://www.patrickjkennedy.net and http://learnaboutsam.com.