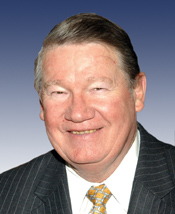 Prior to serving in Congress, he was a commander, fighter pilot and Top Gun instructor in the United States Navy, honored with a Navy Cross, two Silver Stars, a Purple Heart, and 15 Air Medals.

Dean Calbreath, part of the Pulitzer Prize-winning team of investigative reporters who exposed Cunningham's crimes, shared his reaction to today's pardon on Facebook.

"Frankly, it doesn't suprise me. Over the past month, Donald Trump has been committed to pardoning any Republican, no matter what the crime, as long as they or their backers - in Cunningham's case, Newt Gingrich - support him.Fortunately, the pardon doesn't mean a lot. Cunningham has already served his time in jail and - more importantly - he has been out of office for more than 15 years and at the age of 78 will almost certainly never return," Calbreath wrote.

But he added,"That having been said, such pardons tarnish the whole practice of presidential pardons, which were intended to correct injustices in the legal system.Some presidents have given questionable pardons before, but rarely throughout history have reached the level of self-serving venality that Trump has achieved over the past month or so, designed to keep Republicans beholden to him despite his own seditious behavior."  Calbreath noted that the pardons did also include some more denfensible pardons of nonviolent drug offenders and other relatively minor crimes.

Cunningham was originally sentenced to over eight years in prison and ordered by pay $1.8 million in restitution but was released early due to good behavior. He later claimed he regretted pleading guilty and denied committing bribery, however Mitchell Wade pleaded guilty to paying Cunningham over $1 million in bribes in exchange for lucrative government contracts. Kyle “Dusty” Foggo, the second highest official at the Central Intelligence Agency (CIA),  also was convicted of fraud related to the Cunningham scandal.

In issuing the pardon, Trump cited Cunningham’s military service, his efforts to assist fellow prisoners in a literacy program, and his post-prison community service including serving with a volunteer fire department. Cunningham now resides in Arkansas. Cunningham is required to pay back restitution; which is a part of the conditions attached to the pardon.

His former districts included portions of the current 50th Congressional district, from which disgraced Congressman Duncan D. Hunter also resigned after pleading guilty to campaign finance corruption. Hunter also received a pardon from Trump recently, but unlike Cunningham, Hunter was pardoned before serving any time in prison.

Cunningham was among the 73 people pardoned by the former President  just hours before his term expired on Jan. 20, 2021.  Trump also commuted sentences for many others.  The list includes Steve Bannon, former Trump advisor  who was awaiting trial on charges that he raised money to build a border wall and kept the money. Other pardons included Paul Erickson, the conservative political operative and ex-boyfiend of alleged Russian spy Maria Butina, who pleaded guilty to wire fraud and money laundering charges; former Detroit Mayor Kwame Kilpatrick, convicted of federal charges including racketeering, extortion and the filing of false tax returns, and more.