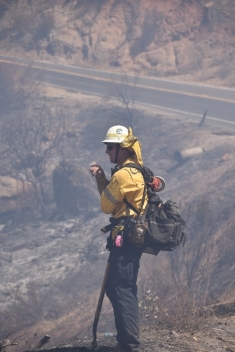 Photo:  battalion chief in charge of former inmates in training as firefighters

September 1, 2022 (San Diego’s East County) -- According to CAL FIRE Captain/Public Information officer Thomas Shoots, crews made a lot of progress overnight on the Border32 Fire. While it is still five percent contained, crews have been busy building a containment line. So they expect the containment to be bigger soon.  Crews-–including formerly incarcerated firefighters--held the fire to 4,438 acres as of 5:30 p.m., only about 200 acres more than last night.

Damage inspectors confirm that 3 homes, 6 outbuildings and 1 commercial structure have been destroyed, as well as 3 RVs.

Temperatures have been brutal, in triple digits. My Jeep indicated the temperature was close to 107 degrees at one point. The weather was also dry, but thankfully not as windy. Except for one minor injury suffered by a fire fighter, there have been no other injuries within the service. Shoots confirmed that there were two individuals who were airlifted last night; scanner traffic indicates they suffered burn injuries and were airlifted to UCSD Medical Center. Five other people were evacuated by Border Patrol in the incident.

There is no cause of the fire determined yet. 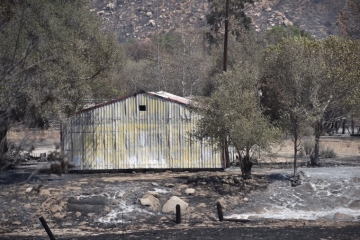 Photo, right: fire investigators were examining the vicinity of this shed at east end of Dulzura

As to opening the roads, they are going to start discussing it, but it is not yet clear when they will allow for repopulation of the fire zone. The perimeter for evacuations in this fire is large, because they want to keep people safe in an area with limited evacuation routes and a history of rapid spread of wildfires, sometimes with deadly results.

Compared to last night’s extreme fire behavior, today the fire is much more under control, with a few flareups here and there. Structure loss remains limited, and this is largely due to the good work owners are doing to keep defensible space. I saw more than one property where the fire went straight to the structure but did not damage the building. 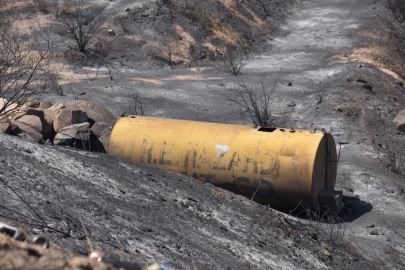 Last night, the incident commander decided not to use the few assets that are capable of flying air attack missions after dark. The conditions were not good enough for that. There are night flying capable assets in the County, with the San Diego Fire Department which did send a chopper to fight the much-smaller Willow Fire in Lakeside late yesterday. CAL FIRE has a few night-flying aerial assets as well, but not in our county.

The fire did burn up to electric power line distribution poles. These are the new fire-hardened steel poles and they were slightly scorched, but they survived. This means that this adaptation to climate change is helping. 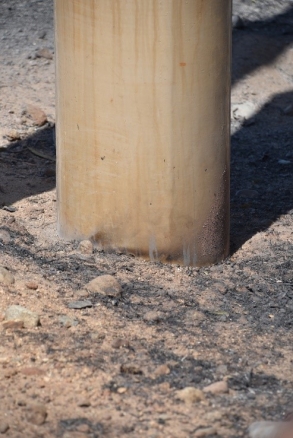 Photo, right:  new steel power pole (painted to resemble wood) withstood the fire, scorched at the base but still standing.

This is the third major fire in the same area of the county starting with the Harris Fire. The other one was the Border Fire of 2014. Both of those resulted in loss of lives as well as property.

At the fire line, I met a few firefighters from the Ventura Training Center. We chatted a tad. They all are veterans of the conservation camps that CAL FIRE and the Department of Corrections run together. At this point they are on phase three of their training, where they have been assigned to firefighting duties. The objective is to give these men and women the training and certifications they need to join the fire service as a career.

As one of these firefighters put it, he made a mistake but now he is ready to serve. He is not ready to be identified or photographed

This is part of a state plan to increase fire personnel due to climate change.

This is the program structure offered by the center.

I met people who are already in phase 3 and preparing for graduation and job opportunities. What agencies will hire them?  CAL FIRE, the Unites States Forest Service and a few other departments. This is facilitated by AB 2147, signed by Governor Gavin Newsom in 2020:

Under AB 2147, a person that served as an incarcerated fire-fighting crew member is eligible to apply for an expungement upon release from custody, and if the expungement is approved, they then would be able to seek various career pathways including those that require a state license. Successful participation in an incarcerated hand crew would be determined by CDCR for those who were incarcerated in state prison. For those in county jails, the local county authority would make the determination.

This camp is also open to California Conservation Corp members. Some of them also have some firefighting experience. 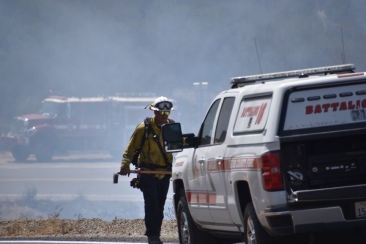