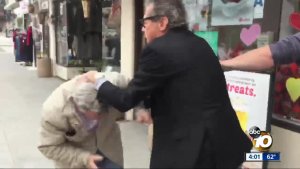 By Miriam Raftery
Photo: Peter Carzis, right, was earlier charged with battery among other charges, after allegedly attacking journalists outside of his La Mesa store.
December 11, 2020 (La Mesa) – Peter Carzis was arrested Tuesday and charged with violating a domestic restraining order, after authorities were called to an apartment in the 8200 block  Lemon Avenue in Lemon Grove, 10 News reports. Carzis had been ordered to stay at least 100 feet away from the protected party’s address, but was arrested sitting outside.
Carzis, the former owner of Peter’s Men’s Apparel in La Mesa, was previously arrested in January and charged with committing a lewd act in public, misdemeanor battery and felony vandalism.  He pleaded not guilty and was ordered to undergo a medical examination at that time.

His January arrest, at age 76, occurred after a video went viral on social media showing Karzis fondling a woman in front of his storefront.  Several other women had complained of sexual harassment when shopping in or walking past his store. When reporters tried to confront him about these actions, Carzis was again caught on camera, this time chasing and lunging at photographers. One TV photographer suffered destruction of a video camera. La Mesa Police recommended prosecution on all charges, shortly before the COVID-19 pandemic shut down courts and delayed trials.

His store has been closed since his arrest in late January.
As an ECM investigative report determined, Carzis had a string of prior complaints against him, including two civil harassment suits.