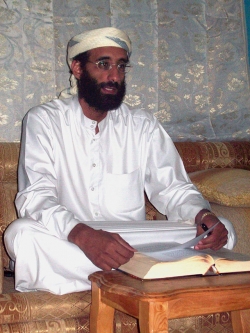 January 10, 2015 (La Mesa) –Anwar al-Awlaki, a former cleric at a mosque on the La Mesa-San Diego boundary and ex-student at San Diego State may have inspired the jihadist brothers who massacred 12 people at the French magazine Charlie Hebdo.  Awlaki was killed by a U.S. drone strike in Yemen in September 2011 and was believed by U.S. authorities to have been a terrorist mastermind tied to the 9/11 attacks and many other terror plots around the world.

Cherif Kouachi , one of two brothers who reportedly gunned down journalists at Charlie Hebdo, was later killed by police following a massive manhunt in Paris. Before he died, Koachi told BFM-TV, “I was sent, me, Cherif Koachi, by Al Qaeda of Yemen. I went over there and it was Anwar al Awlaki who financed me.” Reuters reports that the statement was recorded and aired on French television.

Another Reuters story cited a “senior Yemeni intelligence source” not named who said that Cherif’s brother, Said Kouachi, also med with al-Awlaki during a visit to Yemen in 2011, shortly before al-Awlaki was killed.

Al-Awlaki was believed to have been behind Al Qaeda’s online recruitment publication, Inspire, which in 2013 called for the death of Stephane Charbonnier , editor of Charlie Hebdo, over its cartoon depictions of Mohammed, the New York Times reported.

Al-Awlaki was born in New Mexico but traveled to Yemen in 1978, at the age of seven, according to USA Today.   He returned to the U.S. to attend college at Colorado State University, receiving an engineering degree.  He lied to obtain a scholarship for foreign students, claiming he was born in Yemen.

Later he came to San Diego and studied Education Leadership at San Diego State University, but didn’t graduate.  During his stay in San Diego, al-Awlaki was twice arrested for soliciting prostitutes and twice pled guilty, Time Magazine reported. Later in 1998 and 199 he served as vice president of the Charitable Society for Social Welfare, which the FBI later testified was a front organization funneling money to terrorists, according to the Washington Post.

From 1996 to 2000, he served as imam of the Masjid Ar-Ribat al-Islami mosque near the boundary of La Mesa and San Diego, where according to the New York Times, two of the 9/11 hijackers, Nawaf al-Hazmi and Khalid al-Mihdhar,  attended religious services led by Al-Awlaki.  He later moved to Falls Church, Virginia where he served as imam of a mosque there, which Hazmi also attended.   One FBI detective told the 9/11 Commission that he believed al-Awlaki “was at the center of the 9/11 story.”

Al-Awlaki publicly condemned the 9/11 attacks which occurred September 11, 2001, and said if Muslims were behind it “they have perverted their religion.”  In 2002, he conducted a prayer service for the Congressoinal Muslim Association at the U.S. Capitol and was viewed by some as a moderate.

But in 2002, his radicalism became apparent with publication of an essay in Arabic on the Islam Today website, praising Palestinian suicide bombers, the Washington Post reported.  Later in the year he was placed on the federal terrorist watch list and a federal judge signed an arrest warrant for passport fraud, but that was canceled in 2009 after the statute of limitations expired; in the interim al-Awalaki had returned to Yemen.

In August 2006 he was arrested with four others and charged with kidnapping a Shiite teenager for ransom, as well as participating in a plot by al-Qaeda to kidnap a U.S. military attaché.

He was imprisoned in Yemen in 2006 over a tribal dispute, likely under pressure from the U.S. government, but released in December 2007, by which time his name  was on a list of prisoners whose release was sought by al-Qaeda, McClatchy news reported.

In March 2010, he released a tape urging Muslims in the U.S. to wage jihad, or holy war, against America, CNN reported.   By then he was hiding out in a rugged area of Yemen, protected by his tribe. In July 2010, he called for the death of a Seattle cartoonist and other journalists, the FBI warned, according to a CNN article.

ABC news reported that Intelligence agencies found al-Awalaki had email exchanges with the Fort Hood shooter, Nidal Malik Hasan prior to the massacre of soldiers there.  He is also believed to have recruited the “underwear bomber”  Umar Abdulmutallab who tried to blow up a Northwest Airlines Flight on Christmas Day, 2009, CNN reported.  Documents later released by the administration state that al-Awalki helped Abdulmutallab obtain training, approved the plane bombing and helped the bomber prepare a martyrdom video, Mother Jones reported.  The bombing went awry, however, when explosives in Abdulmutallab’s underwear set him on fire without downing the plane.

Ultimately President Barack Obama authorized the unprecedented targeting of an American citizen, Al-Awlaki, with a drone strike.  The Justice Department argued that the killing was justified as targeting an enemy leader in war or for national self defense.  In 2014, under a federal court order, the Obama administration released a legal memo justifying the targeted killing of al-Awalaki.

Al-Awlaki  survived an air strike in December 2010, the Washington Post reported.  But on September 30, 2011 two Predator drones launched from a CIA base in Saudia Arabia struck a vehicle carrying al-Awlaki and other suspected al Qaeda operatives, killing the radical cleric.  President Barack Obama called his death “a major blow to Al-Qaeda’s most active operational affiliate” and said al-Awalaki “took the lead” in planning terror efforts to kill innocent people around the globe, Fox News reported.

Efforts, it now appears, that may have continued beyond the grave, if al-Awlaki’s efforts inspired the murders of French journalists and cartoonists more than three years after al-Awlaki’s demise.

Chilling. Also unsettling is the copy of the Koran inscribed al-Awlaki that I recently came across in my bookstore.