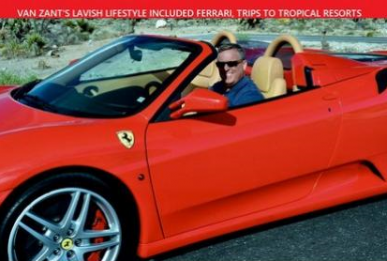 While serving as Superintendent of Mountain Empire, Van Zant pushed through charter schools to operate in other school districts---while profiting by having some of those same charters hire his consulting firm, EdHive Inc.

ECM has learned that Van Zant’s wife, Ingrid, a designer who opened her design business in 2007 –the same year her husband became Superintendent of Mountain Empire, was also hired by the Mountain Empire district.  Her LinkedIn page  listed her as President/CFO of Edhive and Principal Creative Director of Studio 3Sixty.   Both companies list Mountain Empire School District among their clients.  Studio 3Sixty’s site states, “Ingrid is currently working with Charter Schools with identity branding, interior design, tenant improvements, furniture procurement to build-out and remodel of facilities.”

Superintendent Steve Van Zant authorized a dozen or more charters while at the helm of Mountain Empire, before leaving in 2013 to accept a commuting position as Superintendent of the Sausalito Marin City School District in northern California.

Back in 2010, a reader who asked to remain anonymous questioned how the Superintendent could afford to travel to Hawaii and the Caribbean, staying at posh resorts and sailing aboard a privately chartered catamaran to private islands, as the couple’s Facebook pages at the time boasted.  Ingrid’s Facebook page also included photos of a new Mercedes and new Ferrari purchased within a few months' time and mention of a Porsche given to the couple's son at U.C. Berkeley.

ECM was first to expose controversies around Van Zant over his string of charter schools in other districts, as well as other questionable issues.

In August 2010, our story, “Flurry of new charter approvals raises questions over staste funding priorities in an era of budget shortfalls,” probed Mountain Empire’s questionable practice of opening up charters in other school districts with high academic achievements. That included a charter middle school opened in the La Mesa-Spring Valley District, a district with high test scores, at a time when Mountain Empire’s own middle school test scores were in the bottom 10% statewide.

Mountain Empire’s scores were so dismal that the district was forced to closed down its only middle school, yet it continued to provide oversight for more and more charters opening under his supervision.

The charter schools are public, thus take public funds in the form of average daily attendance money. By sucking students away from high-performing existing public schools, these charters diminish resources for the public schools at a time when the recession was causing deep cuts in state funding to schools statewide.

Mark Hanson, former administrator of the Grossmont Union High School District, called Mountain Empire’s opening of charters in other districts “an absolutely travesty, almost unimaginable” adding that the district had a long history of “poor standards and poor oversight.”

At the time of our story in August 2010, California had 860 charter schools in operation, of which half were untested models.  The growing practice of districts making administrative fees for opening up charters in districts other than their own has led to lawsuits, including here in San Diego.  San Diego Unified and Grossmont Union High School districts have both launched legal actions to shut down charters operating without their permission within their boundaries.

The practice also sparked legislation to restrict the practice, but Governor Jerry Brown vetoed it  over concerns that it could force existing schools to relocate. But in his veto message the Governor conceded, “Unfortunately, it appears that some districts and charter schools have gone against the spirit of the law.”

Profiting off the district’s charters personally through his consulting company and his wife’s business venture aren’t the only instances in which Van Zant has faced allegations of wrongdoing.

In an October 2010 article titled “Mountain Empire Unified School District quizzed over alleged misuse of special funds,” ECM revealed allegations by a former teacher and employees of Mountain Empire who alleged that special fund monies from the state intended to benefit low-income and non-English speaking students were “misspent or resshulffled.”  The story detailed costly staff additions including three employees to manage the charter schools--while services to students were cut. Another ECM story in September 2010 indicated rural parents in the district criticized Van Zant’s shuffling of principals, contending it would hurt local schools and Spanish-speaking students, though Van Zant defended his actions.

Van Zant has defended his push for charter schools, which brought revenues into Mountain Empire Unified School District at a time when it was struggling financially.  In 2010 he told ECM, “schools, as long as it’s not taking a focus away, I think it’s a good thing.”

The Sausalito Marin City School District announced on Tuesday that Van Zant is on an indefinite leave of absence at his request, the Marin Independent Journal  reported on Friday. Some parents and civic leaders in that district have also raised concerns over Van Zant giving priority to a charter school, Willow Creek Academy, over Bayside Martin Luther King Jr. Academy.

If Van Zant is convicted,  his job may be the least of his concerns, since he could face up to three years in prison--and that could serve as a learning experience for the former Superintendent.