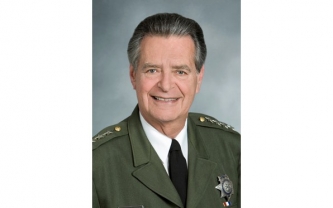 Kolender served as San Diego's Chief of Police from 1976 to 1988.  In 1988, he retired and took a job as an assistant publisher at the San Diego Union Tribune.  In 1995, he came back to law enforcement as Sheriff of San Diego County.  He would be re-elected three times.

Kolender had been fighting Alzheimer's since retiring in 2009.

Kolender was a native of Chicago and a graduate of San Diego State.  He became one of the youngest sergeants in San Diego Police Department's history at age 26 and served in law enforcement for half a century.

Kolender's mission in his early years as chief was to get rid of sexism and racism within the department.  In the early 80s, he founded the department's service dog program. Sheriff Bill Gore credits Kolender with championing rehabilitation programs and community policing initiatives.

Sheriff Gore, in a statement, said, "Recognized wherever he went in San Diego, Sheriff Kolender seemed, in many respects, larger than life. Yet, what we will remember most about him will be his personal touch. When a deputy was injured, he could be counted on to be standing at the hospital bed."

Sheriff Gore ordered that flags be flown at half mast at Sheriff stations countywide in honor of Kolender's memory.

District Attorney Bonnie Dumanis also released a statement, which reads, "I am heartbroken that my friend and mentor, Sheriff Bill Kolender, left us after a long illness. Today, San Diego lost a true law enfrocement hero and legend. Sheriff Kolender iwll always hold a special place in my heart and that of my family."

Funeral arrangements are pending. The family has asked that donations be sent to the Alzheimer's Association at 6632 Convoy Street, San Diego, CA 92111.