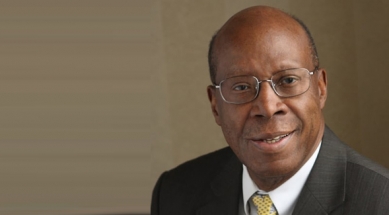 October 3, 2018 (San Diego) - Johnny Young, former U.S. Ambassador to  Sierra Leone, Togo, Bahrain and Slovenia, will speak at San Diego State University, presenting his lecture: “Refugee Resettlement: How did we get here and how do we move on?”

SDSU President Adela de la Torre and Lance Nail, the Thomas and Evelyn Page Dean of the Fowler College of Business, have invited the campus community to attend the event, part of the Charles W. Hostler Institute on World Affairs and President's Lecture Series.

The event will be held from 2-3:30 p.m. on Monday, Oct. 8, in the Conrad Prebys Aztec Student Union’s Montezuma Hall. The event is free and open to the public, but registration is requested. A light reception will follow Young’s lecture.
Young will explore how with leadership, vision and will, the refugee situation can be improved and how the United States can regain its leadership in this vital humanitarian work.
Prior to retirement, Young served from August 2007 to February 2015, as executive director of Migration and Refugee Services of the U.S. Conference of Catholic Bishops and, for a period, also worked as a consultant, contractor and lecturer.
After a Foreign Service career that spanned nearly 38 years, Young retired with the rank of Career Ambassador. During his Foreign Service Career, Ambassador Young served in positions of increasing responsibility and complexity in 11 countries on four continents, including Ambassadorial assignments in Sierra Leone, Togo, Bahrain and Slovenia.
During that time, Young was involved with Operation "Sharp Edge," which was responsible for U.S. support and evacuation efforts during the Liberian war. In addition, the Sierra Leone mission received a Superior Group Award for its assistance in evacuating U.S. citizens following the coup in Freetown in April 1992.
Also, while in Sierra Leone, Young’s embassy led the way among foreign missions in providing humanitarian assistance to thousands of Liberian refugees. He also assisted large numbers of internally displaced persons when the Liberian war spilled over into Sierra Leone.
For his contributions during his Foreign Service career, Young received numerous awards for performance, including one Meritorious Honor Award, two Group Honor Awards and a Presidential Rank Award in 2004.
Prior to joining the Foreign Service, Ambassador Young was the recipient of a fellowship to the Fels Institute of State and Local Government at the University of Pennsylvania. In 1990, he was selected by the Philadelphia School Board for the Obermayer Award, presented annually to an outstanding graduate of the public school system.