November 22, 2009 (San Diego) -- The Center for Social Advocacy (CSA), an El Cajon-based organization,  held its “Homeless in Our Community, Homeless at Our Border” awareness event at the San Diego Woman’s Club on November 6th. The program focused on a long-overlooked and growing epidemic of homelessness prevalent in the County, also recounting the haunting stories of real people facing desperate situations.

As of January 29, 2009, a total of 7,892 homeless persons have been enumerated in San Diego County. This shows a mild increase from last year’s count of 7,582, but a drastic 9% increase from the 2006 estimate (Regional Task Force on the Homeless San Diego). What is more daunting is that these estimates still do not account for hidden homeless sub-populations in the county.

Many actual immigrant case histories were recounted during the meeting, including life-threatening experiences that some have endured just to gain an opportunity to work here. The stories that Rosie Mendoza, Daniel and Susanna Molina told were particularly riveting.

Susanna Molina indicated that her husband, Daniel,"had been very severely abused” by a family member who “denied the medicines that he needed for cancer and high blood pressure, and his social security check monies were taken from him, so that he could not pay the bills on his home." She added, “Now it looks like he will lose his home." CSA Executive Director Estela de Los Rios was called in on this matter and she has made sure that CSA found a lawyer to defend him in this difficult case. Additional stories like this were alluded to in a film titled “The Invisible Chapel.” 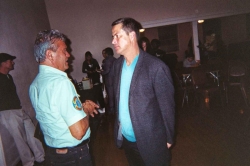 The keynote address featured award-winning director of this film, Juan Carlos Frey. He is a native of Mexico and his directorial debut, “The Gatekeeper,” garnered ten national and international film festival awards.

“Communities have been impacted by our national crises of foreclosures and immigration,” states Estela De Los Rios, "and homelessness has been a result. Juan Carlos Frey’s film is a phenomenal depiction of both issues.”

Robbie Robinson served as Master of Ceremonies for the event, while Rev.Wayne Riggs gave the blessing.

The Center for Social Advocacy (CSA) has been helping vulnerable populations with homelessness for forty years. CSA seeks to promote positive attitudes and actions that ensure respect, acceptance and equal opportunity for all people. CSA has provided civil and human rights services and advocacy in San Diego County since 1969, making the organization among the first and most experienced advocacy and service agencies in the nation. The organization has worked to fight racism and discrimination by combating human trafficking, preventing hate crimes, advocating for fair housing, and providing housing and support services to disadvantaged and immigrant communities.

More information on the Center for Social Advocacy is available at www.centerforsocialadvocacy.org.