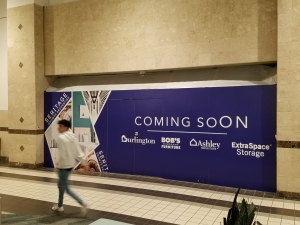 By Paul Kruze, Contributing Editor
February 23, 2019 (El Cajon) -- El Cajon’s iconic Parkway Plaza mall has dodged a bullet with the announcement that the recently vacated Sears store at the west end of the mall will be home to four new stores by Memorial Day Weekend.

A part of the El Cajon retail scene since 1969, Sears had reassured the City of El Cajon that it was not planning its close the two-story store, but the company’s corporate planners and bean counters had other ideas. The local Sears store made its final sale last July. 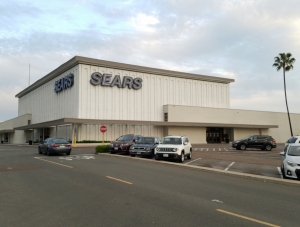 Once a mainstay of major North American retailers, the El Cajon store was one of hundreds of Sears stores facing closure nationwide as the company struggles with declining revenues, unable to compete with high rents, online sales and a growing list of competitors. The only other Sears stores in San Diego County still operating are in Chula Vista, Carlsbad, and Escondido. Kmart, also owned by Sears, has only one store operating in San Diego County and it is in Ramona.
Sears has closed nearly 400 stores during the past 12 months and now has a total of 434 stores left including others slated to be closed. Both Sears and Kmart had a total of 3,500 US stores between them when they merged in 2005.
At its peak in 1999, Sears had 858 full-line stores primarily at malls and some 2,100 specialty stores in freestanding, off-the-mall locations or high-traffic neighborhood shopping centers.
The space at Parkway is still owned by Sears’ real estate holding company, Seritage.
While Parkway Plaza may be breathing a bit easier for now, it is bracing itself for what may come in the future, since the only department anchor stores still at the mall, J.C. Penney and Macy’s, are in financial quicksand and have announced store closings around the country.
Although it does not have a store at Parkway Plaza, Kohl’s is also closing its lower performing stores on the east coast.
Carl E. Ball, General Manager of Parkway Plaza, declined to be interviewed for this article, as well as the mall’s representative for Seritage.
Follow Paul Kruze on Twitter and Facebook: @PaulKruzeNews

I'm surprised that there's still so much movement on the retail front. It seems like there isn't much hope for the survival of such business models these days with everybody moving to online services…