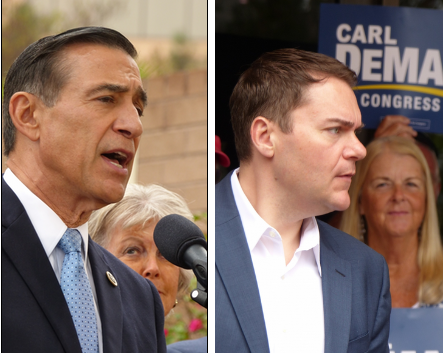 September 26, 2019 (El Cajon) -- The weather in El Cajon Thursday morning was cloudy and drizzly in front of City Hall. But the political rhetoric was sweltering. In the race for San Diego’s 50th Congressional District, four Republican candidates for the seat bowed out and swung their support to former 49th District Congressman Darrell Issa.

Another candidate, former San Diego City Councilman and conservative radio host Carl DeMaio, held a rival press conference some 100 feet away to attack Issa. State Senator Brian Jones, who is also running, chose to remain above the fray by staying away.

After days of speculation by local and national political pundits, Issa, 65, announced his candidacy for the seat held by embattled incumbent Congressman Duncan D. Hunter. Flanking Issa were El Cajon Mayor Bill Wells, former Escondido Mayor Sam Abed, and former Navy Seal commander Larry Wilske. Temecula Councilman Matt Rahn was not at the announcement due to traffic, but all four have withdrawn to endorse Issa.

Issa said the exploratory committee which he established several weeks ago had received more than 2,400 contributions very quickly. “In politics, when thousands of people respond to ‘I’m looking at this, I’m exploring this,’ you pay attention,” Issa told local news media.

“Today I’m announcing I will be the next congressman from the 50th Congressional District. I am dedicated to do that because I believe I have the history, the skills, the seniority and the capability to hit the ground running, not just for this district, but for California,” Issa said.

Until last week, Issa was nominated by President Trump to lead the U.S. Trade and Development Agency. The nomination was stymied when a Senate committee held up Issa’s confirmation due to concerns over material in his  Federal Bureau of Investigations (FBI) background check. It is not publicly known what raise the red flag, although the Los Angeles Times reports that it may be on a matter that occurred 50 years ago when Issa was a private in the U.S. Army.

Issa has previously stated that the allegations including not already in his Wikipedia listing, adding. “I have owned up to being a 17-year-old kid and not a very good private.”

The Los Angeles Times along with other newspapers have done investigations including revelations that Issa received a bad conduct rating and a demotion. There have been allegations he stole a fellow soldier’s car, which Issa wrote about in his 2016 biography titled Watchdog. The New Yorker detailed other controversies including an arson fire at a building owned by Issa.

At today’s press conference, Issa said he flew back to Washington with President Trump after the president visited San Diego last week and discussed Issa’s desire to turn his attention to the congressional race.

The announcement from the former nine-term congressman immediately shakes up the race to replace embattled Hunter, who is scheduled to go on trial in January on 60 counts of federal corruption. Hunter is accused of spending over a quarter of a million dollars in campaign funds on a lavish personal lifestyle, then falsifying campaign expenditure reports to cover up the thefts.

Although Hunter has pleaded “not guilty” to those charges, even many former supporters say that he could very well lose the election in light of his political woes. He squeaked out a win by just three points over Democratic candidate Ammar Campa-Najjar in 2018 in a district that had been considered an easy-win for Republicans. Campa-Najjar is running again for the seat in the March 3, 2020 primary, well-funded in a race Democrats view as a potential pick-up seat. Independent candidate Helen Horvath is also running. 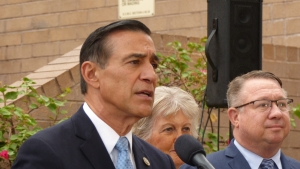 El Cajon Mayor Bill Wells said, “The reason I got involved in the congressional race in the first place is I thought it was very important that the 50th Congressional District continue to be led by a conservative Republican.”

Wells said Issa agreed to address homelessness and the mentally ill at a federal level. Asked by ECM for details, Issa said he wants direct access to mental health services not only for veterans, but everyone in the district. He voiced support for local efforts that show “care and compassion” to get people off the streets and to work to get federal funds flowing to local government to “avoid tent cities” while also honoring the “rights of homeowners” impacted.

Abed stressed border security and Wilske talked about veterans’ issues as common goals when they announced support for Issa.

San Diego County Supervisor Dianne Jacob, who is in the last months of her term also threw her support behind Issa. “We cannot afford to get this election wrong,” Jacob said. “Darrell is battle tested, he has proven leadership that we desperately need in Washington, D.C., and he has seniority.”

Issa, who launched numerous investigations into the Obama administration when he chaired the House Committee on Oversight and Reform, said that if he is elected, his seniority will make him the ranking member on the Judiciary Committee.

After his announcement, Issa was engaged by local journalists on a wide variety of topics including President Trump’s “Ukrainegate” controversy. To that, the longtime former congressman said, “I think this attempt to find a reason to impeach the president is unheard of and uncalled for. Historically, during my ten years and before, you had actual events that actually led people to look into it and only then impeachment became a question.” Issa accused the current Judiciary Committee chairman of aspiring to impeach Trump even before the president was sworn in. 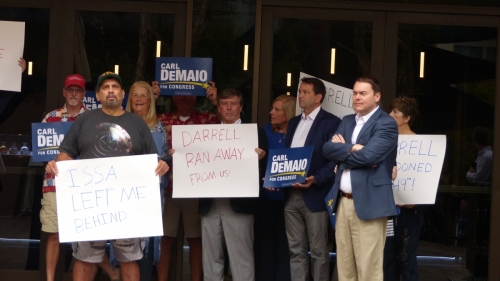 Also throwing his hat in the political ring is former San Diego City Councilman and conservative talk radio host Carl DeMaio, who held his own rival event some 100 feet away from Issa’s press conference. DeMaio was joined by some two dozen of his own supporters under the awning of The Magnolia Theater, trying to deflect the thunder of Issa’s announcement.

Once the assembled local news media set up in front of The Magnolia, DeMaio began, “What we are seeing is the beginning of a battle between the politicians and the people. It is a clear distinction about politicians who have been on the take, politicians who seek position, politicians who give up the fight, and who are quitting on California.”

DeMaio said people in the 50th district “deserve a congressman who is going to fight for them,” adding,“There are so many Californians who are fleeing the state because they don’t see a fight against Democratic Socialism.“

DeMaio did not flinch on his criticism of Issa that he abandoned conservative voters in the 49th Congressional District.

Speaking from a statement released by Diane Harkey, a Republican candidate for California's 49th Congressional District in the U.S. House.  She lost the general election in Nov. 2018, after advancing from the primary on June 5, 2018 following Issa’s resignation.

“Darrell Issa is a quitter who neglected his own constituents for years and cost us a once-reliably Republican Congressional District. Mr. Issa, the richest member of Congress worth hundreds of millions of dollars – raised more than $1 million from unsuspecting Republican donors for his supposed campaign to fight for the 49th District,” Harkney’s statement reads.

“When he announced he was not going to defend his district, he was of course, asked to transfer some of those funds to the Republican Party and other groups to help defend Republican seats in California. He refused and instead transferred $645,000 of his donors’ funds to his personal checking account after leaving office,” DeMaio continued.

DeMaio cited his grassroots support and record of working to cut taxes.

The pugnacious DeMaio also took aim squarely at Hunter. “Shame on the Republican party for not taking out the trash,” DeMaio said. “It is time for Mr. Hunter to resign and give this district a fresh start.”

Issa took a subtler approach, calling Hunter’s situation “regrettable.” He said he has mentored Hunter and been mentored by Hunter’s father, the former Congressman, speaking with both privately yesterday.  While Hunter “deserves his day in court,” the district deserves a member who can hold onto the district in the 2020 election and “quite frankly, show up and vote,” Issa said. Hunter is currently barred from serving on any committees while his trial is pending.

Defying the adage that “three is a crowd,” Senator Jones announced just one day earlier that he will also seek election for Hunter’s seat. 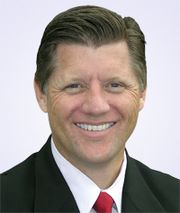 “I am entering the race for Congress to provide a trusted, conservative voice for the people of this district,” Jones said in a statement sent to media. “I am the only candidate with roots in the district, a proven conservative track record and the ability to get things done. I grew up here and have represented the people of this district as a Santee City Councilmember, State Assemblyman and now as a State Senator.”

Of his time serving on the Santee City Council, he said, “We proved that conservative government policies work. We created vibrant residential, commercial and retail development by reducing regulations and keeping taxes low, we funded the recreational and public safety services the public deserves by contracting out services.”

Jones touted his conservative voting record in Sacramento, where he received  a 100% voting score from taxpayer and faith based advocacy groups.  “And while I've never run from a fight, nor compromised on core principles, I've demonstrated the ability to do the harder work of finding agreement in order to get things done. I sponsored 23 bills that were passed by the Democratic legislature and signed into law,” Jones statement noted.

Asked by ECM why he, too, did not hold a rally at the Centennial Plaza location site where Issa and DeMaio held dueling press conference, Jones laughed. “Why am I going to show up at a campaign event which is in the boundaries of Congresswoman Susan Davis district?”

It’s true. El Cajon is split between the 50th and 53rd district, and Centennial Plaza lies squarely in the 53rd -- not the district that DeMaio and Issa are running to represent.

Note: Due to technical difficulties, the video shut off before the end of DeMaio's press conference.