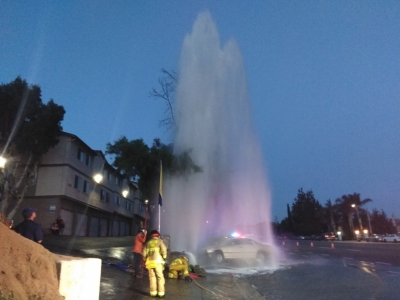 By Ana Nita
July 17, 2019 (Lakeside) -- A towed car came unhitched and hit a fire hydrant last week on Mapleview St. in Lakeside, offering a spectacular show of a four-story high geyser to the Lakeside residents.
According to officer Christopher Aguerre with California Highway Patrol, who responded to the event, there were two cars involved in this incident: a privately own SUV towing a BMW up the hill into an apartment complex.
Aguerre said, “The driver of the SUV was stopped at the top of the hill having a conversation with a person standing outside of the SUV. The SUV was stopped for a short time, when the towed BMW broke free from the SUV.”  He added that the BMW rolled down the driveway and went through a chain link fence down the hill until it hit the fire hydrant.
Lakeside Fire Department and Lakeside Water District was on the scene to stop the water and fix the hydrant. Bernie Malloy, Division Chief with the Lakeside Fire Protection District, said there were no victims and that the BMW was unoccupied. Malloy explained the fire hydrants are designed to break in such way that creates a geyser, “so it would not pull and break the water system that is underground.” 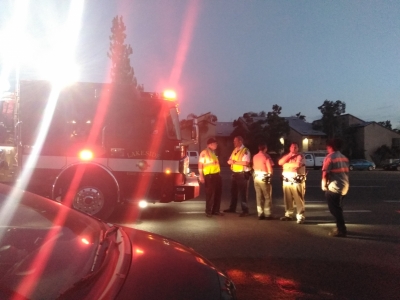 A local resident contradicts the official version of this incident. Jennifer Wade said, “My balcony is directly across the street,” claiming “It was a hit and run accident. I feel sorry for the guy who hit it because the person that hit him and pushed him into it, took off.”
Aguerre responded to Wade’s claim by stating, “The driver of the SUV was present at the scene and the registered owner of the BMW was contacted via telephone, therefore this was not a hit and run.”
The incident took place around 7 p.m. on Monday, July 8 and it took the Water District workers and the Fire Department almost two hours to stop the water.
Link to video:  https://www.youtube.com/watch?v=AwqbGfpJte0&t=40s