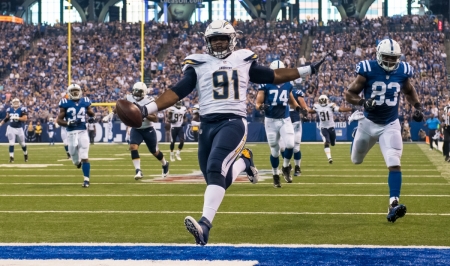 September 26, 2016 (Indianapolis) - After a big rebound in week two, the Chargers went on the road to Indianapolis to take on the Colts.

Even though the Chargers were able to stop the Colts’ touchdown run, making them go three and out on their first drive, the Colts still got on the board first with a field goal from Adam Vinatieri and they led 3-0 in the first quarter. Frank Gore barreled ahead into the endzone with 3:39 left in the first for his first rushing touchdown of the season and the Colts led 10-0 after the extra point.

The Chargers got on the board in the second with a field goal from Josh Lambo to make the score 10-3. Lambo added another field goal and the score was 10-6.  But Vinatieri tacked on another field goal and the Colts extended their lead to a touchdown, 13-6.  With one minute left in the half, the Chargers got their big break.  Jatavis Brown sacked Andrew Luck, who lost the football.  It was picked up by Caron Reed and returned for a touchdown.  The score was tied at 13 after the extra point at the half. 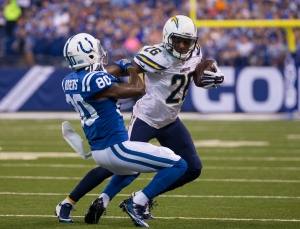 The Chargers took that momentum into the second half.  They marched downfield and handed the ball to Melvin Gordon, who punched it in at the one to give the Chargers their first lead of the game.  Lambo’s extra point was blocked by former Charger Antonio Cromartie, but the Bolts still led 19-13.  But it didn’t last long; after a great drive by the Colts, Robert Turbin rushed ahead for the touchdown and the Colts retook the lead after the extra point 20-19.

In the fourth, Lambo gave his team the lead after they once again failed to convert on third down and the Chargers led 22-20 with 7:34 left in the game.  But the Colts found a way back and the Chargers suffered another heartbreaking loss. 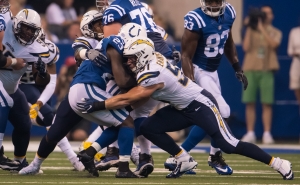 Week four finds the Chargers back at Qualcomm taking on the New Orleans Saints.  Kickoff is at 1:25 p.m.