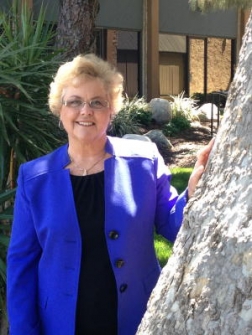 May 9, 2016 (El Cajon) — Francine Busby, chair of the San Diego County Democratic Party and a long-time advocate for women in politics, will be the featured speaker at the East County Democratic Club meeting on May 19th.   The event will be held at MJ’s restaurant in El Cajon.  The meeting starts at 7 p.m. but guests who wish to come early for dinner at 6 p.m. can participate in a social hour.

Busby is former Executive Director of Run Women Run, an organization that recruits and trains women to run for public office. Growing up in an era when girls couldn’t play in sports leagues, wear pants to school or get a job as a”paper boy,” she has believed from an early age that women deserve equal opportunities to excel in whatever they choose and has fought to break down barriers for women.

In her political role, she has appeared on national and local news shows, been a featured speaker on Capitol Hill and college campuses, and served as a delegate to state and national Democratic conventions. She previously ran for Congress and served as President of the Cardiff School District Board.

As an adjunct professor at California State University, San Marcos, she taught a course titled “Women Changing the World.  She holds a B.A. degree in Humanities from U.C. Irvine.

She also had a career in tourism at the Walt Disney Travel Company and in2008 was recognized by Biz San Diego magazine as one of San Diego’s most influential businesswoman.

Currently, Busby is writing a book titled “Why Good People Don’t Run For Office, and Why They Should.”