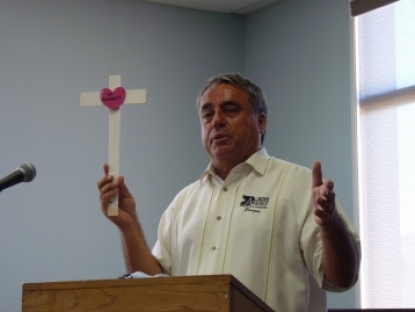 March 9, 2017 (San Diego) — Unless law enforcement has a search warrant, do not open the door. You can remain silent, Enrique Morones, executive director of Border Angels, says. On behalf of the organization, Morones educates the immigrant community of the dos and don’ts for people fearing deportation.

He suggests seeing an attorney before possible deportation, so there’s no confusion in delegating assets. It’s especially important in regards to children under the age of 18 because a power of attorney must be appointed beforehand, Morones said. Otherwise, people have no control over the end result of their responsibilities.

“There’s a lot of risks for the migrants themselves, as far as people aiding the undocumented community.  We’re gonna do it because we have a moral high ground to do it…I’ve never asked anybody; I don’t ask all those people upstairs.  I have no idea if they’re documented or not. I would bet to stay that 99 percent of them are not, but they’re more than welcome to come here to get free immigration services, and we will continue to do that.”

If the defendant facing deportation has lived in the U.S. for five years or longer, has never been convicted of an aggravated felony, owns property and has maintained valid employment, immigration attorneys can fight to reverse deportation, according to the San Diego Immigration Law Center.

An attorney can file a temporary protection order to delay deportation until the legal council has properly prepared a case to present in front of the Department of Immigration. Legal representatives must extensively interview clients about life in America.

James Duane, a professor at Virginia’s Regent Law School told Vice that people should only talk to cops when requesting a lawyer to be present. Police must have a search warrant signed by a judge to certify proper residency.

Morones explains that people shouldn’t open their door to police because it opens the gate of legally unwarranted questioning. If they’re looking for a specific person, Morones said, they should show themselves by exiting through the back, and meeting law enforcement at the front door. And if there’s a raid, don’t sign any documents. Ask for an attorney, or the consul office of your respective country.

“You can remain silent if you want, and people don’t know these things, and that’s why we not only have the attorney upstairs, right now we have one attorney; we’re gonna be having sessions with several attorneys because we’re just getting too big of a crowd. And the first day, November 9th, the day after the election, we had people outside waiting.

“They were saying ‘I’m DACA (Deferred Action for Childhood Arrival). My parents took me across the border when I was little, I had no say in the matter, President Obama signed the executive order, so I’m being protected; what’s going to happen to me now?’”

Border Angels leads guided trips at the California Mexican border to place water along migrant crossing routes in the desert. They tell law enforcement where they’re going to be along the border. Although if they pick up someone along the way, even in downtown San Diego, and the person is undocumented, then the police could make smuggling, or trafficking accusations. These things are punishable, Morones said, but added, “How are we supposed to know?”

Even before the Trump administration, America has been expelling illegal immigrants at nine times the rate of 20 years ago, according to The Economist in February 2014. Yahoo News reports that during Barack Obama’s eight years in office, 3.1 million immigrants were deported.

George Bush deported more migrants than any other president, Morones said. However, Republicans have framed Obama as the leading deported and chief by counting the rate of deportation differently. When Bush was president, they were deporting from the interior of the country, according to Morones. That type of raid wasn’t as frequent when Obama was president, but deportation rates started to include people who jump the wall, then get deported.

The Economist reported, “Border patrol agents no longer just patrol the border; they scour the country for illegals to eject. The deportation machine costs more than all other areas of federal criminal law enforcement combined…We need to have humane immigration policies. More people have left and are coming now, and we need to have humane laws so the people can stay.”

A Pew study found a third of undocumented immigrants were employed in service positions. Roughly 15% worked construction and extraction jobs, while 14% worked in production installation and repair professions. Another 13% worked in sales, office and administrative support roles, although 13% held professional, management or business and finance roles.

When people walk into a store, the cashier doesn’t ask if you’re documented, Morones explains; everybody pays sales taxes. The undocumented community also pays $8 billion a year in Social Security because they go to the Social Security office, and get an ITN (Identification Tax Number). They pay into the system, but they don’t reap the benefits, Morones adds,

“So it’s a situation that people need to realize it needs to be fixed. Everybody agrees the immigration system is broken,” he says. “Everybody wants to have secure borders, but we need to do it in an intelligent matter.”