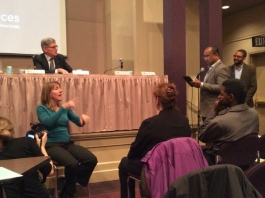 PHOTO: FCC Chairman Tom Wheeler, seen here (top left) at a meeting in January in Oakland, has signaled his support for rules that may threaten net neutrality by allowing broadband service to some companies at higher speed for higher prices. A pushback by opponents is forming quickly. Photo credit: Mark Scheerer.

April 29, 2014 (Washington D.C.) – There will be speed lanes on the Internet if the Federal Communications Commission goes forward as Chairman Tom Wheeler signaled this week, allowing broadband Internet service providers such as Comcast or Time Warner Cable to charge content providers, including ESPN or Netflix, higher prices for faster download speeds.

Internet watchdogs say this would be a huge setback for smaller enterprises and consumers.

Amalia Deloney, policy director for Center for Media Justice in Oakland, says everyone has a stake in protecting the Internet from becoming separate and unequal.

She points to the outcry in response.

"It just shows from rural, to native, to urban, to immigrant that people care about this issue," she adds.

Between now and May 15, when the Commission will formally act, numerous public interest groups are planning pushback efforts that include petitions, pressure on members of Congress and public protests.

The topic was women and technology, but net neutrality dominated the online conversation.

"Question after question, just constantly, was about what the commissioners were going to do to protect women, to ensure they had fair and equal access on the Internet, to ensure that their start-up companies were able to thrive," she relates.

Josh Levy, campaign director of the media advocacy group Free Press, argues that if the FCC allows some corporations to create the equivalent of fast lanes for some customers, it violates the equalizing principle of net neutrality, which also means net discrimination.

Levy calls the FCC's signal a huge threat to a free Internet.

"The only way to stop it is to organize and to channel everybody's anger and energy towards an effort to get the FCC to scrap those rules," he maintains.