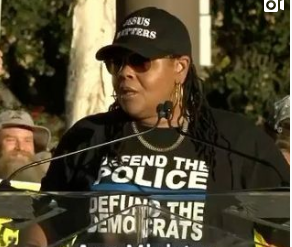 By Briana Gomez
Photo:  Minister Vereta Wilson (@compton_conservative) addresses the crowd
December 29, 2020 (El Cajon) – A myriad of diverse, yet mostly unmasked attendees crowded around vendors and made their way toward a makeshift stage decorated with Christmas décor and a podium in front of the El Cajon City Council chambers, where a “Freedom Rally” was held on Dec. 27 in response to Governor Newsom’s recent shutdown of businesses.

The rally featured speakers such as Mayor Bill Wells, Congressman Darrell Issa, who was recently elected to the 50th Congressional District, and Senator Brian Jones.

There were also several vendor booths and food trucks, making it a cross between a political statement and a farmer’s market, where attendees could sign a petition to recall Newsom, have a tiramisu, and do some holiday shopping all in one place.
Advocates of this event believe that overall data suggests that COVID is treatable and can be resolved by the immune system, despite the fact that the virus has killed more than 330,000 Americans, including over 1,400 in San Diego County (more statistics below).
Many attendees called on the state to reopen businesses. But other attendees included individuals and business owners said they don’t mind complying with reasonable safety measures, but feel that it’s hypocritical to allow airlines and large retailers to operate while their own businesses were operating more safely and have been forced to close down, causing suffering for workers and business owners.
Contrary to the Bible-thumping conservative movement that aligns with opening the economy, the movement has also attracted a lot of liberal “hippies” and alternative healers who believe in a laissez-faire government and feel that the data does not point toward COVID-19 being as deadly as it appears on mainstream media. 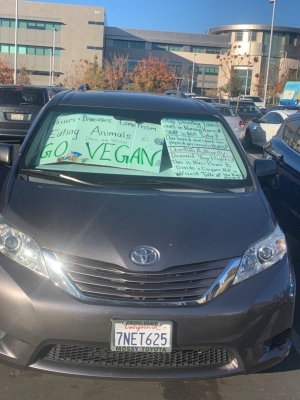 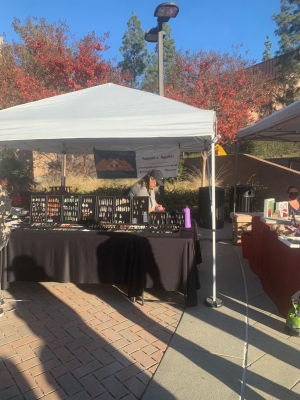 Photo, left: Raquel Aguilar, Crystal Vendor and Crystal Healer operates a booth at the rally
The event was opened with a prayer from Vereta Wilson or “Minister Reta”, also known as “the Compton Conservative.”
Wilson donned a shirt that said “Defund the Police, Defend the Democrats.”
“I came way down here [from Compton] out of my territory to support my patriot, most of all my Christian family,” Wilson opened.
“Use [the speakers] for your glory, Father, as we push against an evil system that the devil is running,” Wilson said in prayer, receiving cheers from the crowd.
The first speaker to take the podium was Darrel Issa, a seasoned former Congressman, newly elected to the 50th District.

Photo, right:  Issa speaks to a forming crowd during the early stage of the event

“Welcome to our wide open El Cajon,” Issa greeted in a juxtaposition to the other 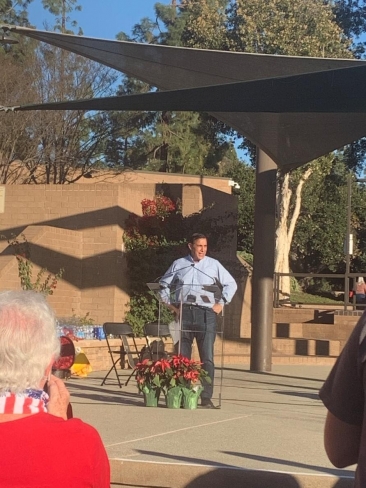 neighboring cities with many closed industries.

“This is the man I’m most proud of, who just happens to run this city,” said Issa, introducing Bill Wells, “because he stood up and said, ‘My city’s not closing…” I want you to know this is my hero and this is our city’s hero.”
Wells received backlash from other cities in San Diego County in addition to public health officials and various state departments for refusing to enforce the recent quarantine measures.
“There are more important things in life than being afraid to die,” said Wells.
“Fear is the watch word of the day, but it’s Christmastime and we shouldn’t live Christmas in fear,” Wells added, “it’s important in the meantime that all of you stand up for your rights.”

Wells’s sentiments are reflective of the anti-mask, anti-shutdown campaign. 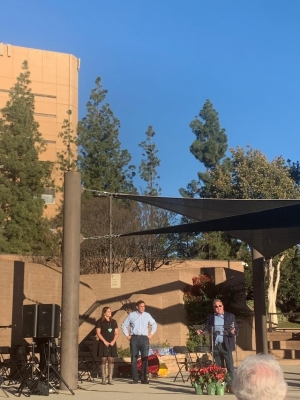 Photo, left:  Wells addresses his audience telling the story of Jesus as a political insurgent
Wells continued to form a parallel with Jesus and the nativity story and the current political climate in the spirit of Christmas.
“People had to make a decision to follow the government…but there were times when the government went too far, there were times when the government took too much,” said Wells, referring to both the Roman Empire of the times of Christ and the present day leadership.
Wells wasn’t the only one who was critical of the powers that be. 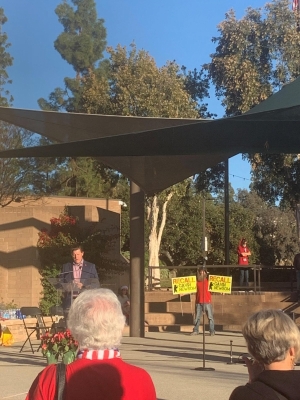 Jones assured that he supports checks and balances that would limit Newsom’s power and advocated support of what he called patriot restaurant owners, who would open in spite of restrictions.

“That’s what America is about – the free market – if they’re offering the services and products you want and you’ve got money to give them, let’s do it!” said Jones.

Contrary to popular opinion, advocates of reopening the economy aren’t necessarily denying the existence of COVID, but some believe the data and severity has been inflated, while others are focusing on overall data as opposed to looking at COVID as the exclusive and imminent threat to public health.

Recent data suggests that COVID deaths in the United States from COVID are just over 300,000 individuals.

In comparison to the 2020 population of the United States at 331 million, this number falls at 0.1 percent of the population, a statistic that those in favor of the economy are heavily focused on to support their assertion.

But put a different way, CNN reported yesterday that one in every 1,000 Americans has now died of COVID.

Globally, the number of deaths is about 1.7 million compared to all counted global cases of 77 million infected individuals, for a global death rate is only two percent. The death rate, however, doesn’t account for many left with long-term serious health impacts such as heart, lung or brain damage from COVID-19.

Other small business owners are dismayed at the hypocrisy of large corporations packing people into large retail stores and airplanes, while local restaurants have taken appropriate precautions and yet were still forced to close.

Some falsely claimed that no outbreak has been linked to restaurants in San Diego County. But in fact, recently released County data shows that restaurants were tied for 208 outbreaks from March to November locally, KPBS reported this month. Restaurants had more outbreaks than any other business except nursing homes.

Alondra Ruiz, owner of The Village Restaurant in North Park is a known local advocate of reopening the economy.

Unlike the conservative Caucasian politicians and audience that are usually drawn to this movement, Ruiz herself is an immigrant and part of an alternative subculture.

She attended the event with a partner, both dressed in alternative fashion,

Decked in all black with combat boots on her petite figure, Ruiz addressed the crowd with elegance and poise.

“Throughout the shutdown I kept seeing a bigger picture, greater than a virus, I kept seeing a consistency of big corporations thriving while small business owners had to close their doors forever,” said Ruiz.

An article in Forbes in July of this year said the COVID pandemic and subsequent shutdowns forced 73,000 businesses to close.

“It is our duty as human beings to stand up against oppression. We must acknowledge that every day we stay silent we are giving up our rights,” Ruiz added.

“If big corporations can open and airlines can sit people elbow-to-elbow next to each other, then small businesses can also open and operate,” said Ruiz.

Ruiz hosted an informative event for businesses owners over the weekend at her restaurant. The event was supported and attended by tattoo artist/celebrity Kat Von D.

“I think we can all agree that we are all of different beliefs and different desires, but the desire that the majority of us has [sic] is to live out the American dream,” Ruiz said.

Ruiz is one of many of the non-stereotypical “Republicans” that have followed the movement against closing the economy and against mandatory vaccines.

The movement has also gained momentum among some of the more liberal community of healers and even health practitioners.

Lara Koljonen is a San Diego-based acupuncturist who attended this event.

Her background is in kinesiology and sports medicine, and she later expanded on that by becoming a licensed acupuncturist in California. Koljonen works alongside traditional western medicine as acupuncture has become a more mainstream treatment and is covered by many insurance plans. 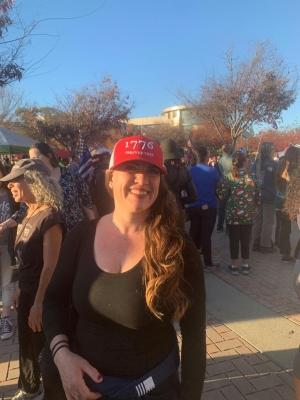 Photo, right:  Lara Koljonen, LAc. wears her freedom hat in support of constitutional liberties to remain open.
Koljonen has advocated against face masks, claiming a need to boost the immune system and focus on personal health through a combination of Chinese medicine, integrated treatments, and nutrition. Her business has been allowed to remain open due to their nature of her profession and doesn’t believe that the population needs to fear the virus.
However there is ample evidence that masking helps to reduce transmission of COVID.  The World Health Organization, U.S. Centers for Disease Control, state and county health officials all urge the public to wear masks and practice social distancing particularly now, at a time when the capacity of intensive care units at hospitals across Southern California has dropped to zero due to an influx of COVID patients.
Unlike in other nations, Congress has failed to enact a significant measure to supplement citizens for several months of lost work due to COVID-19. The previous stimulus that passed was not reflective of cost of living or business expenses in the state of California. President Trump this week signed a stimulus package with a meager $600 per person, just half of the prior stimulus, though it also has a new round of PPP funds for businesses to help workers.
Although the president called for $2,000 per person stimulus and the House of Representatives just approved the larger amount, thus far Senate Leader Mitch McConnell has blocked a vote, while millions of Americans including many business owners are suffering. No doubt the clamor to reopen businesses will only grow louder if the Senate fails to take action.