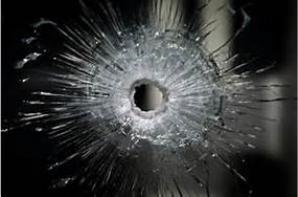 January 30, 2016 (San Diego’s East County) -- The latest car-to-car shooting incident earlier this month on Interstate 8 brings the total to three in the last year, and four in the last three years, prompting the question whether this stretch of freeway from 70th Street east to Los Coches Road is particularly dangerous.

The California Highway Patrol stated that none of the shootings were random and all involved victims and assailants who were acquainted with each other, even if that relationship was brief and transitory.

“None of these shootings were random,” said CHP Officer Kevin Pearlstein. “Each one of them appears to have some sort of conflict, whether it was that night or some previous time.”

“This is nothing like what happened in Washington, D.C.,” Pearlstein said.

He referred to one of the nation’s most notorious serial killing sprees in 2002 when two snipers, John Allen Muhammad and Lee Boyd Malvo, killed 10 men and women, mostly in the Washington, D.C. region, but included one victim in Arizona. Those killed by the snipers were selected randomly at gas stations, malls and parking lots.

The most recent car shooting occurred Jan. 11 at 12:50 a.m. on the I-8 eastbound near 70th Street exit, according to the CHP. A black Cadillac Escalade carrying two women and two men was shot at, resulting in wounds to the two women passengers, Pearlstein said. “The woman passenger in the rear was seriously injured,” he added.

At least a dozen bullets hit the Cadillac and were fired from two guns, a .45 caliber automatic, and 9 millimeter pistol, he said. Unless one shooter was firing both guns, the likelihood was there were two shooters.

However, details about why the shooting happened are sketchy, mainly because the victims failed to identify their assailants, or even provide any information about the model of the car they were driving.

Nor did the victims in the Escalade say whether they had any contact with anyone prior to the shootings, but that is the probability, Pearlstein said.

“They (those in the SUV) were at a rap concert that night in North Park. The rapper was called 'The Game,' he said. “We think one of the occupants of the Cadillac got acquainted with a person or a group of persons at that concert, and at some point, they followed them.”

Despite the lack of cooperation by the victims, the CHP is still investigating who was responsible and scouring video footage of the North Park parking garage for clues. But given the current evidence, and how the victims reacted, the chances this crime will be solved aren’t too high, Pearlstein said.

Another freeway shooting on I-8 near Los Coches Road happened in the early hours of Nov. 5 last year when an Lexus LS400 driven in the No. 2 lane was shot from someone in an SUV being driven in the No. 3 fast lane, according to the CHP. Both the 43-year old woman driver and a 31-year old man in the passenger seat of the Lexus were shot, and were hospitalized.

In this case, one of the occupants in the Lexus was specifically targeted to be shot, and the incident was gang-related, Pearlstein said. The man claimed to have been shot a month or two earlier.

Capt. James Bovet of the Santee Sherriff’s station said he was aware of the case, but there was no evidence of an earlier shooting in his district. “That was his claim but we have no proof of that,” he said.

While the case is still under investigation, “It probably won’t be solved,” Pearlstein said.

On March 2, 2015 about 3:30 a.m., a Ford F350 pickup truck left the Sycuan Casino on Dehesa Road and was followed by a dark-colored Toyota Tercel. The two cars first went on surface streets in El Cajon before entering eastbound I-8 at West Main St., the CHP report states.

Soon after, the Toyota pulled alongside to the left of the pickup and multiple shots were fired into the truck. One round hit the left rear door of the pickup while another round hit the driver, a 50-year old Spring Valley man, in his left shoulder. The pickup’s driver was treated at Grossmont Hospital in La Mesa; the female passenger, 45, also from Spring Valley, wasn’t injured, the CHP report states.

The two assailants in the Toyota were described as Hispanic men in their 20’s, who may have been looking for someone who just won money gambling, Pearlstein said. The four people were seen having some conversation at the casino before the chase ensured, but it is unclear what transpired, he said.

The case remains under investigation.

Another freeway shooting on May 5, 2013 occurred on I-8 eastbound near the SR 125 overpass early in the morning. According to media reports quoting the La Mesa Police Department, a Nissan Maxima with two men were shot at by a light gray or tan sedan at about 3:30 a.m. The passenger in the Nissan, Xusha Brown, Jr., 22, suffered a gunshot wound to his head and died at Grossmont Hospital later that day. The driver was injured, but survived.

After Brown’s death, the Sycuan Band of the Kumeyaay Nation, where Brown was a member and an employee, put up a $50,000 reward for any information leading to an arrest and conviction in the case. The tribe subsequently increased the reward to $100,000 later that year, but so far there’s been no leads.

At the time of the shooting, La Mesa Police said it was gang-related, but neither Brown nor the driver, Malcolm Hune, were gang members.

“The case remains as an active investigation, but no arrests have been made,” said Lt. Vince Brown of La Mesa Police.