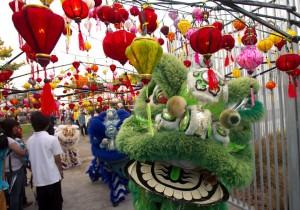 January 27, 2019 (City Heights) --Starting in February, commuters on I-15 will notice new freeway exit signs directing them to exit El Cajon Boulevard to reach the Little Saigon District in City Heights, San Diego. Caltrans confirmed that the signs will be set up at the transit station on El Cajon Boulevard over the I-15 North and South exits on February 1. An unveiling ceremony will be held on that day at 10 a.m. with guests including City Council President Georgette Gomez and Assemblymember Todd Gloria.

The freeway exit signs are the result of a project conceived by the Little Saigon District of San Diego as part of a larger effort to brand the Vietnamese business and cultural epicenter, and to encourage business and tourism into the neighborhood.

The Little Saigon San Diego Foundation is a 501(c)(3) non-profit organization established in 2008 to develop the Little Saigon District by revitalizing infrastructure in the district, promoting Vietnamese culture and tourism in the area, and engaging youth, residents, and businesses in civic responsibilities. The organization was also the main advocate for the formal city-recognized designation of the Little Saigon Cultural and Commercial District in 2013.

The signs were first introduced to the California Legislature in Assembly Concurrent Resolution 173 on February 9, 2018, by Assemblymember Todd Gloria, in collaboration with Senator Toni Atkins, Assemblymember Shirley Weber, and Assemblymember Lorena Gonzalez-Fletcher. Costs for the cultural landmark signs were covered by the Little Saigon Foundation, which petitioned Little Saigon District businesses for contributions and donated funds raised from their annual Lunar New Year Tet Festival, which coincidentally will also be held this weekend, February 1-3, at SDCCU Stadium.

The freeway signs are expected to be a major focal point of this year’s festival, which will celebrate the Year of the Pig. Organization leaders hope the buzz surrounding the installation of the signs will encourage community residents and guests who may not be familiar with the area to visit the festival to learn more about the Vietnamese community while enjoying an array of Asian food, cultural art installations, nonstop live entertainment and carnival rides.

'America' is a nation of immigrants. Just imagine how some. Our forefathers were immigrants, bringing with them: a diverse culture, new foods to consume (and recipes), different languages, a rich history of humanity and so much more. 'Americans' immigrate to other countries as well. What if that weren't allowed? Imagine a world population of such negative, biased, racist views that no one tolerated migration of 'foreigners' to new lands. Cultural diversity is the backbone of the United States. It's made this country what it is today - like it or not.
President Roosevelt had it correct.......One nation, one language, one flag and love on thy country. Promoting 3rd world culture in America can only generate more division. Become an American or leave.

They came here after the Vietnam War in the '60s and '70s.  Moving to a new country does not mean you need to give up your culture and traditions.

Lots of people enjoy cultural diversity. San Diego is rich in ethnic restaurants from around the world and thousands of people flock to multi-cultural festivals.

Why do you think these Vietnamese immigrants, now citizens, don't love America?  As for their culture, it's a lot older than American culture. You might learn some things of value from their culture which teaches courtesy and respect for others especially the elderly and sharing good fortune with others.

Really?  How about YOU get out with your racism.