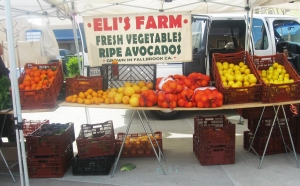 March 22, 2013 (El Cajon)- East County’s newest farmers’ market had its grand opening yesterday on the Prescott Promenade in downtown El Cajon. Many people came, young and old, single and families, all flocking to check out what this market had to offer. Shoppers found a unique blend of fresh produce, unique ethnic and multicultural foods, fresh flowers, baked goods, hot entrees and specialty foods.

An International Rescue Committee (IRC) spokesman thanked the public for coming out and supporting the new market, which benefits not only the community, but also local refugees who are growing some of the fresh produce sold here.

“We desperately needed a farmers’ market. I want to thank the IRC,” said El Cajon City Manager Doug Williford. This is a part of a bigger idea. We can use the public space over and over again for the people of El Cajon, people of East County, and hopefully to the people of Coronado. The city has been very supportive [of the market].”

ECM spoke with Ben Q of Mom’s Mashawa, a catering service online located in San Diego, and he agreed to a recorded interview. At the market, Mom’s served “soup, Afghan-based yogurt style soup, and pulao,” he explained, which is an authentic Afghan dish with rice, raisins, and chicken. The food is typically prepared n the commercial kitchen. “Then we bring it warm here.” These items are imported from “Kabul, Afghanistan. It’s where it was originally marinated.” For more information on Mom’s Mashawa, visit: http://momsmashawa.com/Home.html. Listen to ECM’s interview here. 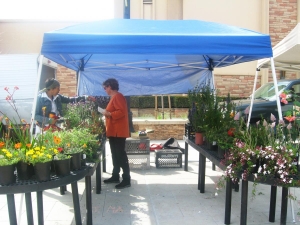 A raffle was held every hour by Andrea Wong from the International Rescue Committee; people could win an IRC tote bag and $20 to spend at the market.

There was even a Kidz Corner, where kids could paint, as well as a booth for the El Cajon Rec Department with class schedules laid out. IRC set up two booths, including the Information/’Fresh Fund’ booth and New Roots Aqua Farm booth. Anne Barron, community garden coordinator, and Troy McKinney, ‘Fresh Fund’ coordinator/market manager, were present as 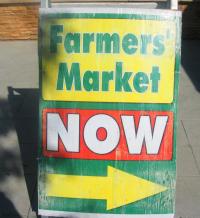 Margaret Folsom, El Cajon resident, was there with her husband. She agreed to participate in an interview with ECM. When asked why she was at the market, she wanted “to check out everything, check out the prices.” They heard about the market in “the El Cajon paper.”

She said that they have been to a farmer’s market “a long time ago; we used to go to the one in La Mesa off University Avenue.” Today, she bought spinach and blueberry bread, and declared, “We’ll probably come back next week.”

The market is opened every Thursday from 3-7 pm. For more information, including how you can become a vendor, visit: http://www.rescue.org/farmers-market