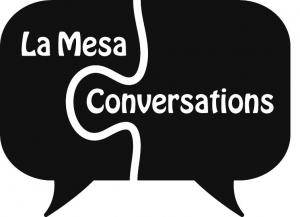 “Community begins with – and is sustained by – communication,” says committee member Dr. Anthony Mc Ivor. “The simplest, most direct, and valuable form of local communication is informed conversation. By tapping into that, the series creates opportunities to learn from each other and to weigh the choices that will shape La Mesa’s future.”

The series opens with the Future of Water in La Mesa, moderated by Ry Rivard of Voice of San Diego. Panelists include Carlos Lugo, General Manager, Helix Water District; John Bolthouse, Executive Director of the Water Conservation Garden; and Lani Lutar, consultant to the Water Reliability Coalition.  The program runs from 6:00 to 7:30pm on Wednesday, September 23 at San Pasqual Winery on La Mesa Boulevard.

The program format reflects the La Mesa Conversations Committee’s belief that major city-wide issues cannot be tackled by a single agency or organization. “Initial public response to this approach is overwhelmingly positive,” notes Committee member Bonnie Baranoff. “People want to know how we can address these issues as a community, working together,” she says.

In upcoming programs, the series will feature discussions of public safety/policing, transit, downtown re-development, and recreation/hospitality initiatives across the city.  These public conversations will take place in the historic Mason's Lodge on Date Street downtown.

“For small cities like La Mesa, civic engagement is crucial,” says Colin Parent. “We are hosting an ongoing dialogue about how our city will continue to grow and thrive,” Parent affirms.

Conversations programs and events are open to all and free of charge.  Seating for the water discussion in September is limited.  For further information or RSVP visit www.lamesaconversations.org