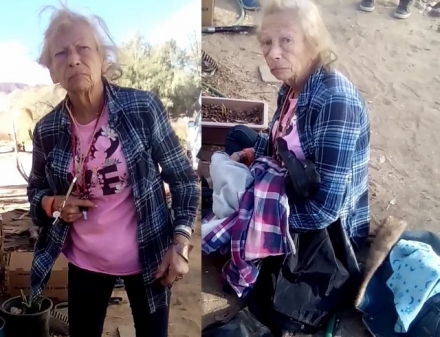 Photo:  Friends of East County’s Diane Mattingly are circulating these photos of her taken earlier this month, via Times of San Diego

December 29, 2020 (San Diego) - Friends and neighbors of Diane Mae Mattingly of the high desert near Anza-Borrego say she’s been missing more than two weeks but haven’t had much help from the Sheriff’s Department.

“It seems like they’re dragging their feet,” her pastor, Brian Kellar of Butterfield Community Church, said of the agency. “I feel that more should be done.”

Mattingly, whose first name also has been reported as Diana (and Dianea in her 2003 divorce records), suffers from dementia and Alzheimer’s disease, says Lisa Nellom, her neighbor at the Butterfield Ranch RV Resort on county Highway S2.

Nellom, 58, has been a caregiver for Mattingly, attending doctor’s visits with her and helping the 64-year-old single woman remember when to take medications, she said Tuesday in a phone interview.

Sheriff’s spokesman Lt. Ricardo Lopez says deputies with the Sheriff’s Rural Enforcement Division responded to the 14000 block of Great Southern Overland Stage Route in Julian around 12:30 p.m. Dec. 15 to investigate a report of a missing person.

(Nellom says she reported Mattingly missing on Dec. 12, although she may have been spotted by a fellow church member on Dec. 13, according to Kellar, walking north in Shelter Valley.)

Lopez says information was uncovered that Mattingly was looking for a ride to Ramona or El Cajon.

“There is no indication of foul play,” he said. “Local law enforcement agencies in areas where Mattingly is known to frequent have been notified to be on the lookout.”

He said the Sheriff’s Department has received no information indicating Mattingly suffers from dementia.

“However,” Lopez said via email, “she is listed as being ‘missing at risk’ for other health problems. The investigation is ongoing.”

Kellar, Nellom and others say they are frustrated by the lack of law-enforcement urgency.

Unlike city police departments, which often circulate press releases and photos on social media, the Sheriff’s Department hasn’t publicized the search for Mattingly.

Nellom, who moved next to Mattingly in April, says her missing neighbor has two daughters she hasn’t spoken with in several years, and a granddaughter on Facebook. (Her husband, Steven Thomas Matingly, sued for divorce in March 2003, according to San Diego County court records.)

She says Mattingly asked her to be her caregiver.

In January, she was looking forward to start getting retirement pay from her longtime job with an “auto company,” Nellom said.

The day before she vanished, she lost a bank card that had cash on it, Nellom said.

Mattingly was crying, she said.

“I had to give her cigarettes,” Nellom said. “She wanted a Pepsi.”

Maes tried to see if she checked into a hospital and talked to people in the community, she said.

But Pastor Kellar was frustrated by the lack of follow-up.

“All they’re doing is coming here taking pictures of her trailer,” he said. “That’s not finding her.”

He added: “It’s almost as if they’re: ‘OK, we’ll just let you tell us all about it. And we’ll wait for you guys to do the investigation and take it from there.'”

Kellar and others, including NBC San Diego’s Catherine Garcia, have circulated photos taken of her days before she went missing.

He’s thinking of that as well.