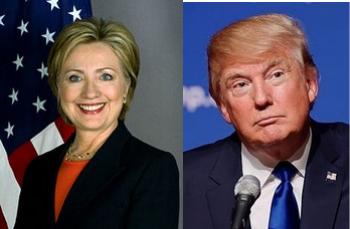 April 27, 2016 (San Diego) -- Voters in Connecticut, Delaware, Maryland, Pennsylvania and Rhode Island went to the polls on Tuesday to help select the Republican and Democratic candidates for president. Both frontrunners added handily to their delegate count, with business and reality TV celebrity Donald Trump sweeping all five north-eastern states and former Secretary of State Hillary Clinton winning four out of five.

Vermont Senator Bernie Sanders won the Democratic primary in Rhode Island. Texas Senator Ted Cruz conceded the evening before polls even closed. Cruz is now mathematically eliminated from winning the Republican nomination on the first ballot at the GOP convention in July.

Trump won at least 60% of the Republican votes cast in Delaware and Rhode Island, 55% in Connecticut and Pennsylvania and 54% in Maryland. Ohio Governor John Kasich finished second place in each contest except Pennsylvania, where Cruz took the number two spot.

Across all contests, Trump picked up 109 pledged delegates. In addition, CNN reports that at least 27 of the 54 unpledged Republican delegates elected in Pennsylvania on Tuesday are Trump supporters. Rhode Island awarded John Kasich five delegates and Ted Cruz three, with none of the other four contests awarding delegates to either Cruz or Kasich.

On the Democratic side, Clinton added at least 209 delegates to her count and Sanders at least 146.

Tuesday’s results greatly reduced the likelihood of a contested Republican convention. With his strong showing and near delegate sweep, Trump is finally on track to receive all 1,237 delegates he needs at Cleveland’s Republican National Convention in July on the first vote. This is important, since most of the party loyalist delegates become unpledged on the second round of voting, free to vote for whomever they wish.

Indiana is seen as the last reasonable chance to stop Trump because its 57 Republican delegates are awarded on a winner-take-all basis. Trump and Clinton have narrow leads in the Hoosier state. Although the map ahead favors Cruz, CNN reports that Trump only needs 251 of the remaining 502 delegates yet to be awarded in order to win the nomination on the first round of voting.

Clinton’s victory speech made it clear that she is a polished public speaker. She said, "We want America to be in the future business," a veiled critique of both the Republican Party and Trump’s "Make America Great Again" slogan. She called for an "American clean energy superpower" that facilitated a "prosperous, inclusive, descent society." She also spent a good deal of time praising Bernie Sanders on a number of issues including healthcare, Wall Street reform and education.

Sanders has vowed to stay in the race through the convention. “The answer is, we are in this race until the last vote is cast,” Sanders stated, adding, “The people of California have a right to determine who they want to see as president of the United States and what kind of agenda they want the Democratic Party to have.”