September 18,2011 (Lemon Grove) – The public is invited to witness history on Thursday, Sesptember 22 at 12:30 p.m. City, county and state officials will be on hand to announce details of the Main Street Promenade Redevelopment Project—and watch demolition of vacant buildings near the trolley station.

Structures are being razed to make room for a linear park and transit plaza, which will serve as  gateway to the city and as a central location for community events including a farmer’s market and concerts. Solar energy and wind power will be produced to help offset the park’s $2.3 million cost, paid for through two grants plus redevelopment funds. Ultimately, the promenade will also serve two mixed-use developments planned on adjacent lots with affordable housing, commercial space and a seniors housing project. 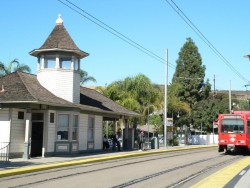 “We are really excited about redevelopment,” Councilman George Gastil told ECM. “It is long overdue. We are going to have more feet on the street in downtown Lemon Grove, which will not only help our businesses but also make us a more vibrant community,” he said of the project, which is designed to increase foot traffic downtown. “We also have a place for a community garden in the plans.”

Helen M. Ofield, president of the Lemon Grove Historical Society, also praised the project which will preserve the town's vintage trolley station (formerly a railway depot). “These are not historic structures, but beat-up old buildings long past their prime,” she said of the structures slated for demolition. “It is time to say goodbye. We are at last moving on to a project that originated in the city’s General Plan of 1996.”

That plan called for rejuvenation of downtown with special emphasis on walkability and transit-oriented development as well as a distinctive town center. Envisioned is Lemon Grove Historic Walk and Trolley Plaza,” she said, adding that the working title is Windmill Plaza. “There will be solar-powered elements, public art, historic photographs, and places to sit and enjoy,” the city’s historian revealed.