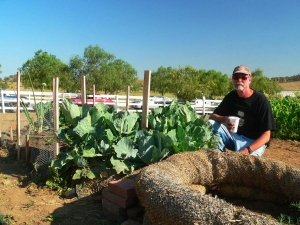 July 19, 2009 (Ramona)—“We started looking at the economy and saying hey, people are going to need to start doing community gardening,” Dave Patterson, founder of the Ramona Forum, told East County Magazine. Most members of the forum, which was founded as a political discussion group, had little experience in farming. But they did some research, pooled their efforts and pitched in to create a garden that now provides ample produce for around 15 participating families.

After seeing gardens with straw wattles in San Francisco, Patterson bought several for around $25 each. More typically used on construction projects to prevent erosion, the 25-foot-long wattles serve as easy and inexpensive substitutes for raised wood planter beds. Wattles can be bent into shapes to fit odd-sized spaces, stacked, or laid out in standard geometric forms. Patterson recommends laying them out in an oval shape so that crops in the center are easy to reach.

Add clean fill dirt or amended soil and top with eight inches of compost. “If you have gophers, you can add wire mesh fencing and stakes,” Patterson added. Wattles can be purchased in irrigation stores or hardware stores in rural communities such as Ramona. 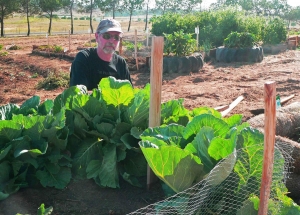 Other crops are planted in the centers of old truck tires. “They’re great for peppers, because they hold the heat,” said Patterson, who recommends the book Food, Not Lawns for more tips on urban farming.

“We call this our Peace Garden,” said Patterson, a Viet Nam veteran and leader in the Veterans for Peace movement. Crops grown include tomatoes, cabbages, peppers, eggplants, corn, onions, and much more.

Forum members helped till the soil and weed the crops. “Some stuff died,” said Patterson. “The soil is mostly clay, so we have to amend it properly and deep water. We added drip.” Forum members have used a limited amount of chemical fertilizers, but no chemical pesticides. They also created a cold frame to start seedlings before transplanting in the garden.

“This is all a learning experience—grow as you go,” said Kathy Sellers, who found success by stacking wattles two-high, making crops easier to reach.

For Tetsuo Matsui, who was raised on the island of Maui and worked in pineapple fields, gardening brings back memories of his mother raising flowers. Today, Matsui grows tomatoes and enjoys weeding as his contribution to the community garden. 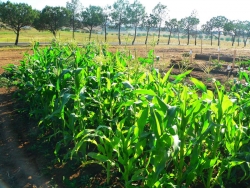 On a recent summer afternoon, members held a potluck beneath shade trees adjacent to their modest-sized garden plot and savored freshly harvested vegetables.

Next up, members plan a corn roast and will soon plant fall crops such as Indian corn and pumpkins.

Some members are also raising chickens and exchanging fertilized eggs—and some envision broadening their community garden efforts to share with others in the Ramona area. In the future, Patterson revealed, “We want to start a co-op in town.”