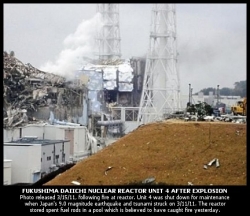 May 11, 2011 (San Diego’s East County) – Several of our readers have asked for updates on the crisis at the Fukushima, Japan nuclear reactors. I expected that since the story seems to have fallen off the radar of most major media, the situation might have stabilized.

The truth is quite the opposite. The best site I found with reliable updates is Energy News, a site dedicated to reporting the Fukushima crisis with links to top news stories and videos from reputable news agencies worldwide. High radiation levels have been found consistently outside the official exclusion zone. Yesterday’s headlines alone make clear that a resolution is nowhere in site:

I like how they summarize the article they are linking you to. Sometimes that is enough...sometimes I follow the link to read more. Thanks for letting everybody know.