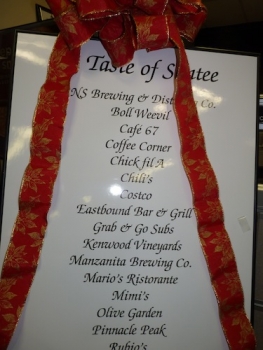 December 10, 2013 (Santee) -- The Santee Chamber of Commerce hosted its 26th annual Taste of Santee at Union Bank on December 5.  The place was packed for this popular event, which was free for guests who brought a new toy or food item for Santee Santas.

Fifteen restaurants, breweries and wineries brought their best stuff.  The food was delicious. Olive Garden brought its signature lasagna and salad with creamy Italian dressing.   Pinnacle Peak came to let everyone know they are still around and intend to relocate in a year or so (following an impending land sale); they just may be the last genuine, mesquite grilled steak-house in town.   The Manzanita Brewery unveiled its coffee brewed Ale.  he brew had a hint of rich coffee bean flavor that made me think how natural it was to roast hops, barley and coffee beans together to make beer. 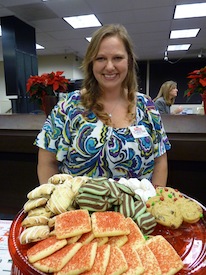 Not to be outdone the newest brewery in Santee, BNS Brewing & Distilling Co. served up Moonshine.  Yes, hard liquor distilled right here in Santee.  It definitely had a kick-- but much more flavor than I had expected from sugarcane and corn.   DNS will soon have its cabaret license from the County as a live music venue at its Western themed brewery next to the Santee drive-in theater. 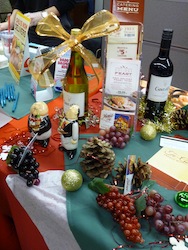 Community spirit was evident as Santee becomes a destination for dining and entertainment and not just an afterthought, just as the East County Eater predicted long ago.  I was disappointed, though, that many ethnic restaurants weren’t represented like the Sushi and Thai restaurants in Santee, the German-themed Sausages and More in nearby Lakeside, or the many Middle Eastern and Mediterranean restaurants in neighboring El Cajon. 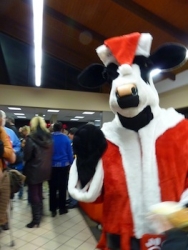 The 27th Taste of Santee will have to be in a much larger venue to accommodate the growing crowds—and hopefully an even broader array of local eateries.