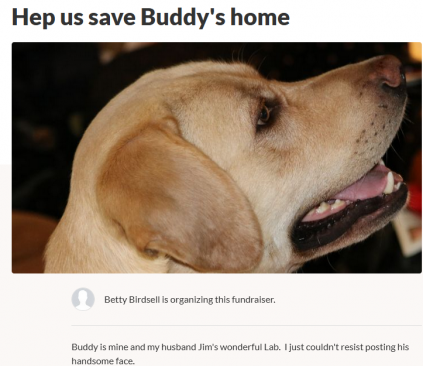 April 24, 2021 (Julian) –  Betty Birdsell has served as an elected member of Julian’s community planning group, secretary of the Julian Chamber of Commerce, owner of the former Bad Betty’s boutique and helped organize relief efforts after the Cedar Fire.  Her husband, Jim, is a long-standing Julian resident whose family has been in the community since the late 1800s.  An engineer and contractor for the National Forest Service, he is also a ham radio operator and along with Betty, helped many residents after the devastating 2003 firestorm.

But now the couple has fallen on hard times due to health issues and the pandemic. So a fundraiser has been set up at GoFundMe to help save the home that the couple shares with their dog, Buddy. The fundraising page is titled “Help us save  Buddy’s home.” But so far, only about 10 percent of the $25,000 goal has been reached.

“We have fallen on hard times due to the federal government's shut down on the maintenance of the roads in the national forests,” Betty posted the GoFundMe page that she set up. “That was Jim's  primary source of income.  He has been out of the private work force for a very long time.  He got his General Engineering license in 1980 and we have not ever wanted for any basic necessity.  I have always worked and contributed to our income, but because of a four-month stay in the hospital  I had to  give up my 34-year job.  Our income has stopped except for our social security income.  Jim's health has suffered of late and about two months ago he was working under his truck and it fell on him.  It seems that that good man can't get a break.”

She continues, “We have fallen behind in our house payments, although our mortgage company is very compassionate and they haven't foreclosed on our home.  It is the only home we've ever known in our 37-year marriage.  We never thought we'd ever have the need to ask others to share their hard-earned money with us.  We've always tried to be good people and to help others as we could.”

Recalling the efforts of herself and her husband to help people recover after what was then the largest wildfire in California’s history, she recalls, “ It took long hard hours to help people, but we have been blessed and it was our turn to give back.”

The Birdsells’ generosity also extended to taking in four disadvantaged children from troubled homes to raise in addition to three of their own.  “I've always believed that the good Lord puts you just were you are supposed to be just when you need to be there,” Betty says.

On the GoFundMe site, Betty also makes this pledge to donors. “I promise that if we should be blessed to be able to keep our home, that if we get more than the money we need to save our home, I'll give whatever more there is to others who need it. Thank you for considering our situation and God bless you.”