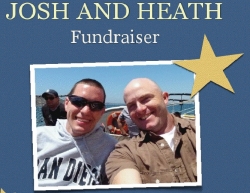 October 29, 2011 (El Cajon) – A crash on September 30 at Chase Ave. and Jamacha Rd. in Rancho San Diego has left two men battling major injuries. Josh Zelt remains hospitalized in very serious condition, while Heath Holley was recently released and is beginning his recovery from home, according to the San Diego Chapter of the American Association of Zoo Keepers (AAZK).

The organization will host a fundraising benefit on Friday, November 18, to help the two victims, both San Diego Zoo employees, who were broad-sided by a driver arrested on suspicion of driving under the influence.

The benefit will be held at Wine Steals-Urban, 1243 University Avenue in San Diego 92103 from 2-8 p.m. on Friday, November 18. Admission is free to the benefit, which includes prize drawings and a silent auction. Donations can also be made to the Josh & Heath Expense Fund at http://joshandheathexpensefund.wordpress.com/

Zelt was working as a bird keeper at the San Diego Zoo at the time of the accident. Both Zelt and Holley are members of the AAZK.

East County Magazine assistant editor Mayan Avitable was on her way to a dance class when she came across the accident scene. “It looked like the small compact car had been run over by a white van,” she said.

CHP officer Brian Pennings said witnesses and physical evidence indicated the driver, Dustin Beyer, 21, failed to stop for a red light. His 2007 Ford Econoline struck the 2000 Honda Accord in the driver’s door. Beyer has been charged with felony driving under the influence.

Both these guys are super good friends and Co workers, So, if anyone can donate anything to raise $$ to help Josh, it would be much appreciated. Thanks, Deena