September 19, 2012 (San Diego’s East County) – Author H. Jackson Brown once observed that “Our character is what we do when we think no one is looking.”

Now a video shot secretly during a fundraiser for Mitt Romney with wealthy donors is sparking controversy over his apparent insensitivity to nearly half of the American people. In the video, which Romney admits is authentic, the presidential candidate is seen insulting Americans who receive any form of public assistance—including recipients of Social Security and Medicare, as well as military veterans, students, the disabled and the poor.  He also slammed those who pay no taxes—from retirees to some of his own wealthy patrons.

His remarks have drawn sharp criticisms even from many conservative Republican commentators.

“There are 47 percent of the people who will vote for the president no matter what…who are dependent upon government, who believe that they are victims, who believe the government has a responsibility to care for them, who believe that they are entitled to health care, to food, to housing, to you-name-it,” Romney said of President Barack Obama supporters in the video shot in May.  “These are people who pay no income tax.” He added that “My job is not to worry about those people. I’ll never convince them they should take personal responsibility and care for their lives.”

Conservative commentator William Kristol slammed Romney in his Weekly Standard column for insulting some of his own supporters, including retirees on Medicare, though some other right-wingers praised Romney for drawing attention to what they claim in increased dependency on government programs.

Several news organizations have initiated fact checks that found Romney distorted facts to woo his wealthy donors.  The Los Angeles Times  Business section, in a news article today, derided Romney for “fundamental inaccuracy” and “erroneous conclusions” drawn, then asked “how he can make policy in a fact-free context, and how he can even know his own mind if he doesn’t know what he’s talking about.”

While it’s true that 49% of households in the U.S. include at least one member who got a government benefit last year according to the U.S. Census Bureau (a slight rise from 44% before Obama took office), it’s false to suggest that all or most of these are freeloaders. It’s also true that 46% paid no federal taxes, according to the Tax Policy Center; however the majority of those have worked hard in the past—including seniors living on Social Security and Medicare who earned their benefits during their working lives, the Los Angeles Times reports.

So just who are those folks who are reaping those government benefits?

Over a quarter (26.4%) of households drawing federal benefits have someone enrolled in Medicaid (healthcare for low-income Americans) and 16.2% on Social Security.  Just 1.7% are receiving unemployment and 15.8% are getting foodstamps.  Another 2 million are college students who receive tax breaks for college expenses.   23 million are low-income women and children receiving help to afford food, while 20 million are low-income disabled.

There are also 3 million veterans receiving compensation and 1.9 military retirees receiving pensions,  700,000 getting workers’ compensation due to injuries on the job, and 2.5 million federal retirees or their survivors receiving either pensions or disability checks, the Tax Policy Center reports.

Even the conservative-leaning Wall Street Journal  ran a fact-check on Romney’s remarks and found that almost half (44%) of those who paid no taxes are moved off tax rolls by elderly tax benefits and another 30% for credits for children and the working poor. Moreover, nearly 2/3 of households that paid no income tax DID pay payroll taxes or property taxes, as well as state and local taxes.

Moreover, 6 out of 10 people who didn’t pay taxes were white, the Congressional Research Service found in 2010.

Critics have been quick to note that Romney paid only about 14% in taxes over the past two years on more than $45 million in income for 2010 and 2011.  He has repeatedly refused requests to make public his returns for the prior decade, when Senate Majority Leader Harry Reid has charged that Romney paid no taxes.

Ironically, of the 10 states where people pay the least in federal income taxes, eight are Republican-leaning,  the Tax Foundation, a nonpartisan organization, reported in 2008.

Comedian John Stewart, meanwhile ridiculed Romney as the captain of a ship heading toward an iceberg--and faulted Romney for slamming welfare queens --then played an old TV clip of Romney's mother admitting that Romney's father once received "welfare" after moving here from Mexico. http://www.mediaite.com/tv/jon-stewart-tears-apart-romneys-assertions-about-the-dependent-47-percent/

Far from backing away from his comments, Romney has confirmed that he stands behind his remarks.  “This is a message I’m carrying day and day out and will carry over the coming months,” he told Fox News. “This is a decision about the course of America, where we’re going to head.”

Romney has further faulted Obama for a statement the President made in 1998 suggesting that “I actually believe in redistribution, at least at a certain level, to make sure that everybody’s got a shot.”

President Obama, in response, faulted Romney for “writing off a big chunk of the country.”  The President added, “One of the things I learned as president is you represent the entire country. If you want to be president, you have to work for everyone.” 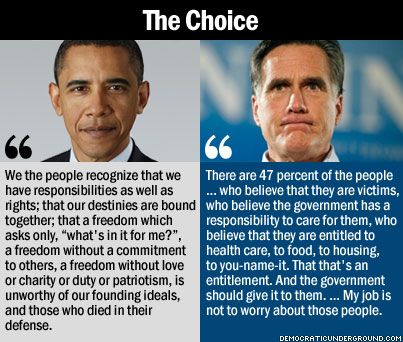