October 3, 2013 (San Diego)--In an attempt to make heads or tails out of the fallout from the resignation of former San Diego Mayor Bob Filner, the Green Experts Academy held a forum entitled “San Diego Civic Crisis: Where Does The Green Sector Go From Here?” at the Cricket Communications headquarters in Kearney Mesa on September 26th.

The ex-mayor, during his short tenure, had outlined an ambitious plan and vision to commit city resources towards an environmentally sound “green policy” which included a strong commitment towards the use of solar energy and increased recycling of city waste.  Now with the city facing a special election to elect its next mayor, the forum intended to recognize the future of a citywide “green policy” in light of the civic debacle.

Three frontrunner mayoral candidates, Nathan Fletcher, Mike Aguirre, and current San Diego City Councilman Kevin Faulconer were invited to the forum, however, did not attend. The only announced candidates to show were current city councilman David Alvarez and Bruce Coons, president of the Save Our Heritage Organization .  The campaigns of the former candidates said they were not able to attend the forum due to a previously scheduled mayoral debate for that evening. 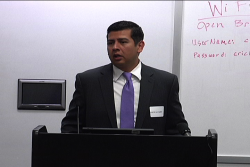 Alvarez, who has championed social and economic justice and environmental causes throughout his political career, has been endorsed by the San Diego Democratic Party and the San Diego Labor Council.  Elected to the San Diego City Council in 2010, Alvarez chairs the city’s Natural Resource and Cultural committee among other positions. Running on a platform of environmental sustainability, Alvarez pledged to continue to utilize city building assets for solar projects.

“The conversation over the next several months is also going to be about TransNet and how we utilize those funds we have for transit projects,” he said. “We have to ensure that we have a city planning department that is strong .  We need to ensure that we grow  [as a city] in a smart way.” He also discussed bringing major economic development projects to the inner city areas of San Diego. “There is a lot of potential to do a lot of right things for the city. We need to have the right leadership to do so.” 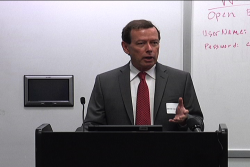 Bruce Coons, who heads San Diego’s “Save Our Heritage Organization” and most recently was instrumental in derailing a major plan to remodel the west end bridge to Balboa, said that he looks towards making community input a major part of any decision-making process in his administration should he be elected.  He said that while the current candidates have made a “neighborhoods first” agenda as a part of their platform, none of the candidates have addressed projects which have true community input.

“Before someone tries to sell me some great idea, I will need to have three questions answered: One, what do the residents say. Two, what are the community groups and planning groups saying. Three, what does the project do to improve the life of the citizens of San Diego,” he said. “I want to know that about the project before I hear anything else about it.”

Coons discussed his vision for increasing energy sustainability and park open spaces.  He also hoped to see an improved public transportation system for the city “the opposite of inconvenient and inconsistent.” “I want to bring together the great minds of San Diego to bring about a blueprint for our future,” he said. He also cited a wish to oversee the creation of a public utility set up to buy energy generated by alternative energy sources. “That would be the best way to promote solar energy. SDG&E is not going to do it and they’re going to frustrate us in any way.”

Current polling done for ECM news partner 10 News and U-T San Diego by Survey USA as of September 24th, 2013, with 527 likely voters with a sampling error of +/- 4.4 percent, has Qualcomm executive and former Assemblyman Nathan Fletcher, a former Republican who recently became a Democrat  with 30%, Councilman Kevin Faulconer (R) with 22%, David Alvarez with 17%, former City Attorney Mike Aguirre with 9%, and Bruce Coons with 2% of the vote, with 4% “other” and 15% “undecided” rounding out the race.  If no one candidate receives 50% of the votes in the November 19th special election, a runoff will follow.  The poll concludes that in a hypothetical runoff, Fletcher would defeat Faulconer 44% to 30%, Fletcher defeats Alvarez 52% to 24%. 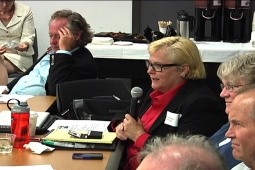 The topic was further explored by another panel discussion which included Lane Sharman, co-founder of the San Diego Energy District, an organization which hopes to establish a regional public energy district to compete with San Diego Gas and Electric and cause its planned downsizing, as a significant provider of what is termed “clean electricity.”

The highlight of the evening was a talk by East County environmental activist, Donna Tisdale, who outlined her struggle to combat unbridled development of alternative energy projects in the unincorporated areas of San Diego’s East County areas by SDG&E, Pattern Energy, Infigen Energy and other alternative power development conglomerates.

"Most decisions about rural zones are made by urban legislators," she said.  "Most of the projects [in east San Diego County] are very disuptive]," going on to say that at two more SDG&E Powerlink projects are slated to begin construction in the near future.