February 24, 2011 (El Cajon) –Should El Cajon renew its Community Development Corporation (CDC) and Planned Business Improvement District (PBID)? Downtown merchants will be asked that question starting in mid-March, when a petition for renewal will be circulated to bring the issue up for a vote.

But a Blue Ribbon Commission chaired by developer Daryl Priest issued a report January 31st calling for the CDC/PBID to be suspected because of “ineffective management” by the CDC. The CDC in turn has issued a point-by-point rebuttal while mobilizing community support. 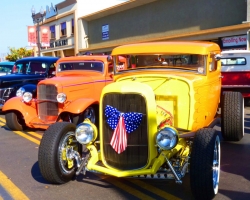 The report also deemed the CDC "poor" in most categories, surprising given the CDC's recent track record of attracting a flurry of new businesses to fill many vacant storefronts, but did give the CDC average marks for the events it hosts to bring visitors into downtown.

In its point-by-point rebuttal, the CDC disputes many contentions raised and suggests some data was misinterpreted. The CDC response also criticizes some proposals made by the commission and hints at a potential ulterior motive by some commission members in the building industry. “There is no reason to abandon the grants program and other redevelopment activities in favor of an acquire, scrape and build program.” The CDC response states.

The CDC also indicates that it has implemented some changes in response to criticisms raised by El Cajon Councilmembers last year, including instituting an anti-nepotism policy. The CDC is under new leadership in recent months, with Cindy Fargo, a professional with extensive redevelopment experience including the Gaslamp District in downtown San Diego, at the helm.

“I was a consultant 15 years ago who helped put together the Property Improvement District here back then,” says Brad Segal, principal of Puma Progressive Urban Management Associates in Denver. Segal has been brought on board by the CDC because of his local experience. “I was really struck at how the community has changed in 15 years,” he said, recalling that the town “was in hard times” back then. “There are really a lot of changes in downtown El Cajon—streetscape, restaurants, a new public safety center, the plaza in front of the first Baptist church, and it just seems cleaner and safer.”

He credits the CDC and PBID for a leading role in those changes, aided by the City, local property owners, developers and others. “Observation number one is job well done—this place really has improved over 15 years,” he concluded.

The CDC has documented many of its recent changes in its 2010 annual report, which lists numerous new businesses that the CDC takes credit for helping bring to downtown, ranging from a bridal boutique to a brewery and steakhouse.  CDC leaders also spoke with East County Magazine about their goals, challenges and accomplishments in a January 14th story titled "Vitality Returning to Downtown."

Segal and the CDC have been meeting with local property owners since a contentious meeting last week at which the Blue Ribbon commission presented its findings and the CDC presented its responses. He said many businesses are supportive of retaining the CDC/PBID, which he believes is “gaining traction to move forward.”

The CDC has proposed changes in response to some issues raised. Instead of three redevelopment zones, CDC proposes two zones for simplification purposes. CDC also proposes changing the method of assessing property owners and a 10% budget reduction for PBID. “Under our proposed formula, property owners will see a reduction in their assessment on 88% of parcels,” Segal said. In addition, the CDC recommends creation of a property owners’ oversight board.

“Starting in the middle of March, property owners will be asked to sign petitions to move this forward and require a vote, which will take place in early summer,” said Kristin Lowell, principal of KLI finance in Sacramento contracted to lead the recertification process.

Aside from the Blue Ribbon report, the CDC faces uncertainties as a result of Governor Jerry Brown proposing to eliminate redevelopment agencies as a budget-cutting means. That plan has faced stiff opposition from the League of California Cities and redevelopment organizations. “The Governor had to roll out ideas about redevelopment cuts…he couldn’t have redevelopment as a sacred cow,” Fargo noted. But she added that potential litigation over a constitutional issue may ultimately block the Governor’s plan even if the Legislature approves it.

She expressed confidence that the CDC and PBID will win renewal. Asked about the Blue Ribbon report, Fargo noted that the commission had only a short time to examine complex issues. “that’s a lot of work if you don’t have a baseline of information when you get started.” She added “Mayor Pro Tem Kendrick asked me to prepare a point-by-point response to the report and I did; I think I should let the answers stand for themselves.”