An important meeting is set for Wednesday night, August 14 on the future of fire service in the Rural Fire Protection district, which serves many communities in East County.

If the district remains independent, funding will revert back to 207 levels—with no stipend pay for firefighters for rural stations, according to a letter sent by the district’s fire board to residents. SD Rural Fire_important-letter . 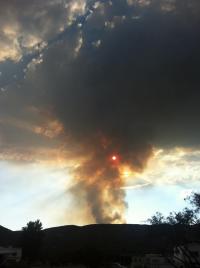 Rural Fire is the latest in a string of fire districts in unincorporated areas of the County to face takeover by the County Fire Authority.  Some, such as Julian-Cuyamaca Fire District, have opted against the consolidation and found outside funding to fill the gap, while others have opted for consolidation with mixed results.  Ostensibly intended to improve fire safety in the wake of the Cedar Fire, the consolidation has had unintended consequences including dark days with unmanned stations in some communities.

The Rural Fire Protection District’s Board has issued a statement of the options before residents of the district concerning the district’s ongoing operations.  That Board statement is located here:  http://www.sdruralfire.org/cms-assets/documents/109758-92448.important-letter.pdf