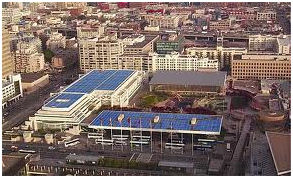 By Leon Dale Thompson
August 1, 2012 (San Francisco) -- The future for solar power is bright—based on the exciting innovations at the InterSolar North America conference for solar energy professionals. Consumers can also look forward to solar that’s more affordable than ever before, thanks to advances exhibited at the world’s largest trade show in the heart of North America’s biggest solar market.

More than 18,000 people from 60 countries attended the conference in July, which included 900 exhibits in the massive Moscone Convention Center in downtown San Francisco. Attendees came to see the latest innovations in photovoltaic cells and modules, manufacturing, balance of system components, mounting and tracking systems, energy storage technologies, solar heating and cooling technologies, and many other products and services.

Just the size and scale of the event was overwhelming. So I set out to discover if I could, the direction and latest technologies driving the solar industry.

Industry leaders recognize this as a game-changer.  In reality, photovoltaic (PV) has come within the reach of the average homeowner in North America.  This is hugely significant because it may well shift priorities from massive industrial scale energy production to more rooftop and regional applications. 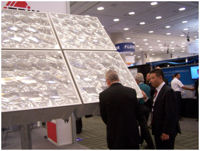 Innovative storage technologies have made it possible to save the electricity generated during the sunniest parts of the day for use after the sun goes down. 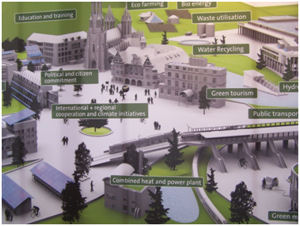 Fascinating was the presentation by the Mayor of Freiburg Germany, a quaint town completely solar with absolutely no sign of energy transmission.  No poles, no wires just clean air and beautiful views, a perfect example of shared regional energy generation.
I was especially interested in solar thermal technologies.  Solar thermal is the practice of heating water using the sun.  Solar thermal is the “best buy for the buck” of all solar technologies.  Heating water using the sun will reduce a family’s monthly energy bill by 30% to 50%.
The average cost of a conventional solar thermal system in California is around $6,500.00.  Each system I’ve installed included a super-insulated holding tank, a conventional water heater as backup, an overflow tank for hot days when no water is being used and a pressure release valve to protect against overheating plus anti freeze protection.
The new solar thermal system pays for itself in three to five years.
However, an Austrian company has perfected and simplified solar thermal.  SunMaster has been making collectors for the solar industry for 35 years.  The company has put all the technology into perfecting the collector box that sits on your roof.  Two hoses connect to your existing hot water heater and that’s it.
Integrated into the collector is a photovoltaic cell that powers a small circulation pump.  The pump eliminates “stagnation.”   Stagnation occurs when the sun is shining but nobody is home or using hot water during the day. The sun will heat the still-water to boiling temperatures.  The solar-powered circulation pump eliminates stagnation.
The Austrian solar thermal appliance caused quite a stir at the convention.  It will provide a home with 90% of its hot water needs - in Austria where the weather is much cooler than East County.  The simplified installation eliminates the need for an electrician or plumber and costs half as much as a conventional system.
I left San Francisco with a renewed optimism about the future of solar energy.  Innovation has caused the cost to be lower, efficiency higher, and a growing awareness that there are viable alternatives to expensive and dirty utility-grade energy.

With all the recent tax and "fee" increases to pay for all these new "progressive" FREE programs I do not have any money left to put solar on my house. Anyway, SDG$E says I don't need it. I can just see all the "green" energy flowing through the new power link running through my community. Wait, they haven't built the "green" part yet!