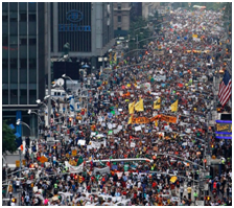 June 28, 2015 (San Diego) – It’s been front-page news in Europe, but scarcely reported in the U.S. – though the news is of epic proportions.

On June 6th, at a meeting in a Bavarian resort,  all seven of the G7 world leaders agreed to end all use of fossil fuels by the end of this century and to reduce greenhouse gas emissions 40 to 70 percent by 2050, compared to 2010 emission levels.   In another sweeping commitment, they agreed to limit global warming to less than 2 degrees Celsius compared to pre-industrial levels, Reuters reports.

German Chancellor Angela Merkel, dubbed the “climate chancellor”, led the successful efforts to gain the commitments from the G7 leaders of  Britain, France, Germany, Italy, Japan, Canada and the United States, which was represented by President Barack Obama.   Next up, the G7 leaders aim to create an agreement at the upcoming United Nations conference in Paris, where some 200 nations will work to set a new global agreement on cutting greenhouse gas emissions.

The recommendations reached by the G7 leaders for reducing global greenhouse gas emissions are within the range recommended by the United Nations climate change panel and drew swift praises from environmental groups.

Germany set the model, having shut down all of its nuclear plants and pushed forward with renewable energy sources, backed by strong public support.  As of April 2014, Germany produced 74% of its power from wind and solar power.

Japan and Canada initially resisted the G7 agreement but ultimately supported it. Japan’s resistance stemmed from the country’s decision to close all 48 of its nuclear reactors after the Fukushima nuclear meltdown in the wake of a powerful tsunami and earthquakes.   Japan has no fossil fuel reserves, and despite an increase in use of renewable, still relies on imported oil, gas and coal for the majority of its energy. Canada has large reserves of oil and gas, potentially profitable resources, though also sources of controversy as the XL Pipeline controversy has shown.

Avaaz is a global civic organization that has championed climate change action by organizing a 700,000-person strong climate change march and claims to have secured 2.7 million signatures on a petition for carbon-free fuels delivered to world leaders.

A statement from Avaaz to supporters reads, “Just last year, climate change seemed to many of us like a behemoth that was dooming our species to a significant probability of extinction due to our own stupidity and corruption.” But now Avaaz voices hope, adding, “most experts now believe the tide is turning, and momentum is building to get a global deal in Paris this year that will set the world on course to a solution. It will be a long fight, we cannot afford to drop our guard, to today, we celebrate a battle won!”

To top it off so many of these countries rely on the United States to provide medicine, technology, ENERGY, protection with our military yet the end goal is to stop energy use by the U.S. and the U.S. only because all the other developed countries like Russia, and China will disregard the G7 as a bunch of crybabies.

so the so calleld world leaders decide to end the use of fuels for the masses.... how will they get around to davos and the world conferences, sail boats? of course not .. hypocrites, thieves and abusers, every one of them