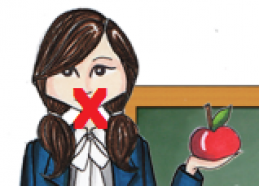 In the suit, AUSD and Alpine taxpayers had sought to force the GUHSD to pay for building a high school in Alpine. The lawsuit was filed after the San Diego County Grand Jury issued a report titled, "Fool us once, fool us twice."  The grand jury recommended that the GUHSD set a firm timetable to build the Alpine high school twice promised in two bond measures, or turn over funds to the AUSD so that it could expand from K-9 to K-12 and build the high school. But the GUHSD did neither, defying the grand jury.

But after the court ruled in favor of the GUHSD, the financially-strapped Alpine parties entered into a settlement agreement.

The gag order prohibits the AUSD, Alpine Taxpayers for Bond Accountability (ATBA) and its members from disparaging the GUHSD’s current or former board members, Superintendent or officers for their decision not to build a high school in Alpine or their decisions to use Proposition H and Proposition U bond monies despite bond language that led voters to believe the school was a priority.  (Grossmont later argued successfully to the courts that an enrollment trigger had not been met, leading to a decision favoring Grossmont and settlement of the lawsuit against the GUHSD).

Did the gag order prevent people from Alpine from running for the GUHSD board?  Redistricting gave representation of Alpine to trustee Jim Kelly.  Despite  Kelly’s repeated opposition to funding the high school’s construction, and large community turnout at redistricting hearings where many concerned Alpine residents spoke out in favor of a high school, as well as a two-decade battle by Alpine residents to get a high school built, Kelly wound up running unopposed.

Was it because the people with the most institutional knowledge, expertise and passion for an Alpine High School were silenced by the settlement?

The gag order came to light after Lou Russo, a candidate running for the AUSD, sent ECM an email criticizing ATBA member George Barnett for a post on social media criticizing the GUHSD on the Alpine High School issue, which Russo says violates the nondisclosure clause. Russo and Barnett have a long history of feuding on the Alpine Community Planning Group as well as over the contentious high school issue in the past.

The October 4, 2018 online post on Loving Life Alpine by Barnett came in response to a comment by Stephanie Maynard in a discussion of an aquatic complex. Maynard stated “The AUSD board really screwed our children over. Alpine residents are wanting a huge change with our schools the funding, programs and education and plan on voting the old AUSD board members out!” She then endorsed Russo.

Barnett, also president of the Alpine Education Association, replied to Maynard, “You’ve got it backwards, perhaps. The screwing-over that Alpine kids got was from the Grossmont Union High School District Board that now won’t build the high school after it was voter-approved and funded.”

Barnett later amended his comment to add, “What was or was not built using GUHSD bond funds is not material to Alpine having its own swimming pool complex. II fully agree that the GUHSD Board has the right and authority to spend bond money as it so approves. I had no intent to disparage GUHSD. And I offer an apology if readers took that impression. Ms. Maynard's posting of the settlement refers entirely. So, I withdraw and deleted all comments in that regard. What's material to the discussion on the community center is if Alpiners want to pay for a complex."

In an email to ECM, Barnett noted that the GUHSD has an Alpine School on a project list for “something like 2038,” long after the children of those who have long fought for the school will be grown and graduated.

Alpine had little choice but to sign the settlement, having also lost a unification proposal that sought to break the AUSD away from the GUHSD and allow it to build the high school, a plan that fell apart when Alpine lost its legal bid to have a portion of bond monies transferred from the GUHSD to the AUSD to fund the school’s construction.

The settlement lessened the financial liability of the AUSD, but at a high cost to the community, denying the rights of many of those most involved in the fight for an Alpine High School to speak out on the issue, support or oppose any candidates for the AUSD or GUHSD, or take a position on any future bond measures.

It also effectively prevents many leading education voices who have long advocated for an Alpine High School from running for either school board, since it would be difficult to run to represent Alpine without answering voters’ questions on this vital topic, nor avoiding criticisim of an opponent for undermining efforts to bring a high school to Alpine.

Meanwhile, candidates with opposing views have free reign to speak their mind, preventing voters from hearing a range of views on topics of broad public interest and impact.