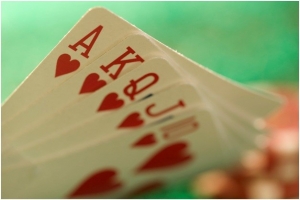 May 3, 2014 (Lakeside)--A world famous gambler accusing of cheating Barona Casino out of $8,000 will be arraigned in court on May 14.   In a preliminary hearing earlier this month at the El Cajon courthouse, Judge John Thompson found sufficient evidence for the defendant to stand trial.

According to the prosecution, Anargyros Karabourniotis, also known as Archie Karas, was caught on surveillance cameras marking cards at the Barona Casino in Lakeside.

He faces charges of burglary, winning by fraudulent means and cheating.  If convicted, he could face up to three years in prison.

Karas gained famed after he reportedly turned a fifty dollar bet into a 40 million dollar winning streak on games of poker and dice—though he later lost it all, gambling his fortune away.

This is not the first time questions have been raised by authorities about Karas, who has been arrested four times previously in Nevada.

On May 14, the famed high roller will learn whether his luck has finally run out.