Strict playoff scheduling combined with the absence of lighting at Point Loma High School moved the game to Mt. Carmel High School. Both teams played for the right to go to Qualcomm Stadium to play in the Division III Championship on December 11th.

The Cougars got on the board first on a 33-yard touchdown run by Alex Perlin on a fourth-and-one play. Steele Canyon had a short field to work with on this drive after Taylor Mishler recovered a fumble by Point Loma quarterback Keegan Fitzgerald at the Pointers’ 43-yard line.

Point Loma responded with a 13-play drive that ended with a 15-yard run by Leslie Rogers, tying the game at seven. It was one of many big plays in the running game for Rogers.

"The offensive line gave me a good look. I told them that if they open the holes I'll hit them," Rogers said about the success he had. He would finish the night with 114 yards on 19 carries. 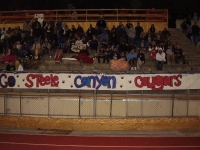 The seesaw battle continued when Steele Canyon’s Reece Dale broke free on a 42-yard touchdown run. He was in motion prior to the snap and took the handoff from Brad Boehmke before heading to the end zone untouched.

This play must have caused some muttering among Point Loma fans for two reasons. First, it resembled one that the Pointers’ offense would run in their Wing-T offense. Second, if that was the case, the Pointers’ defense should have been able to stop Dale. Point Loma’s Davis Callejon blocked the point after attempt, so the score remained 13-7 in favor of the Cougars.

Fitzgerald tied the game at 13 when he scored on a one-yard run. It capped off an eight play drive where every play was a running play. The point after attempt was blocked, keeping the score tied at 13.

Point Loma temporarily disrupted the trend of trading points with Steele Canyon by stopping them on their next drive. Although Jake Wregg ran for 27 yards on the first play of the drive, the Cougars were unable to make much progress after that and were forced to punt.

The Pointers took advantage of the opportunity with a solid drive that led to a 38-yard field goal by Ruben Diaz. It gave Point Loma a 16-13 lead at halftime. 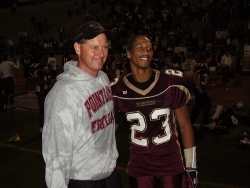 It’s conceivable that this disruption of trading points with Steele Canyon may have allowed Point Loma to eventually win the game. Callejon’s block of the point after attempt and Diaz’ field goal account for four points, which eventually became the margin of victory.

These two plays combined with the Pointers’ defense denying Steele Canyon a scoring opportunity may have made this segment of the game the turning point for Point Loma.

In the second half, both teams continued to trade scores. Perlin put the Cougars ahead with an 11-yard run that gave the Cougars a 20-16 lead.

The Pointers took a different approach on their next possession. Instead of using the running game and ball control, they went for the big play. Fitzgerald found Callejon wide open on a 74-yard pass and catch play that went for a touchdown and gave Point Loma back the lead, 23-20. The drive only took four plays.

"We basically set them up with a lot of run, a lot of run. Then when the play action came in, they bit hard," Fitzgerald said about the play, "the X came over the top and it was wide open."

Steele Canyon continued the oneupmanship when Boehmke found Cody Simpson wide open on a pass play that went 71 yards for a touchdown. Once again Callejon blocked the point after attempt, but the Cougars had a 26-20 lead. The drive only took two plays.

On the Pointers’ next possession, their running game took over. In fact it was so effective that all 13 of the plays on their next drive were running plays. Nine of these plays went to Fitzgerald or Rogers, but it was Morris Matthews who came up with the game winning score on a 12-yard run that gave Point Loma a 30-26 lead.

The Cougars had a couple of chances to regain the lead, but could not get past a resurgent Point Loma defense. Their first drive of the fourth quarter progressed to the Pointers’ 28-yard line, but an intentional grounding penalty by Boehmke on third down moved the ball back to the 42-yard line and forced the Cougars to punt.

On Steele Canyon’s next drive, the Pointers’ defense was even stingier as they took over on downs after four plays. Fitzgerald kneeled down three times to run out the clock and preserve the victory for the Pointers.

"Really happy for our kids. It's been our goal to get back to Qualcomm and attempt to win the CIF Championship. We've taken one more step tonight towards our goal. It's fun, it's awesome! This is what high school football is all about.  Steele Canyon was a great team, they played really hard. It went down to the bitter end there and it took a really good defensive stand by our kids to pull it out."

Returning to Qualcomm Stadium for the championship meant even more to Rogers than just a victory: 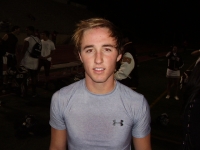 With the loss, Steele Canyon finishes the season with a record of 8-4-1. For the second straight season, they lose the semifinal game and miss out on a trip to Qualcomm Stadium for the sectional finals.

Point Loma improves their record to 9-3 and will go to Qualcomm Stadium next week to face the 11-1 Dons of Cathedral Catholic High School in the Division III championship game.

Christopher Mohr is a freelance writer in the San Diego area and is an avid Chargers, Padres and Detroit Red Wings fan.