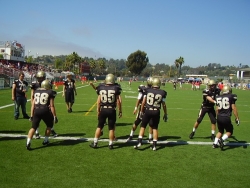 (SOLANA BEACH) September 26 - One of the most common sports cliches is that some opponents can't be stopped; they can only be contained. Anyone who defended Michael Jordan, pitched to Tony Gwynn or golfed against Tiger Woods knows the concept all too well. So do Santa Fe Christian's first three opponents this season.

The Eagles won their first three games with scores of 53-6, 50-22 and 42-6. When the first quarter of their game with Grossmont ended with no score, it had to be an unusual experience for SFC, but in the end, the Foothillers only slowed down the Eagles and still lost 23-14. 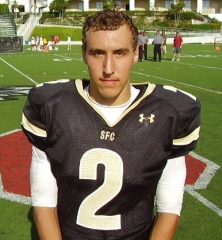 On an individual level, SFC's Sam Hoekstra also seems to come from the 'containable but not stoppable' mold. He scored the first points of the game on a reverse play that went 80 yards for a touchdown to put SFC up 7-0. He later added an interception and a 53-yard run.

Sometimes even containment can be a challenge; not only in Hoekstra's case, but for the whole Eagle offense. One problem is that so many run the ball for the Eagles that if defenses keyed on Hoekstra, other players like Keaton Giannotti, Trent Von Yokes and Jarrod Wilson-Lewis could pick up much of the slack. Just before halftime, Von Yokes ran the ball in from seven yards out to extend SFC's lead to 14-0. 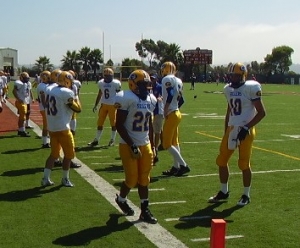 The Hillers got right back in the game in the third quarter. Dylan Cooper intercepted a pass from Giannotti and just two plays later, Grossmont used some razzle-dazzle to fire up the team. On a halfback option play, Deshaun Waters found Brett Etherton wide open on a 48-yard touchdown pass play.

"The offensive coordinator was just watching when we ran a toss the first play before to see if they'd stay up and the next play they called a halfback pass. I was running, I saw the corner coming up hard and just threw it over his head," said Waters, describing the pass to Etherton.

Unfortunately for the Hillers, the one-touchdown deficit would not last. Wilson-Lewis added a nine-yard touchdown run and Matt Kirwan kicked a 32-yard field goal, allowing SFC to make a Grossmont comeback highly improbable.

That's not to say they wouldn't try. In reaction to SFC's defense being a little too aggressive, Tyler Mutter threw a screen pass that Waters took in for a 38-yard touchdown. However, with a 24-13 SFC lead, Grossmont would have needed two scoring drives in the last 1:39 of the game to tie, which did not happen.

Some might find consolation in the Foothillers' loss, but don't expect anyone from the team to join that group. Losing is still losing no matter how close. Missed opportunities such as a failed field goal attempt and two drives ending in interceptions could have made up for the 11-point difference in the final score.

Stats don't paint a complete picture either. As far as scorekeeping goes, an errantly thrown pass that hits the ground, a drop by a receiver or a throw batted into the turf are all treated equally, but all three tell different stories. In Grossmont's case, the SFC defense had their passing game read. In addition to two interceptions, the Eagles batted down passes and just missed intercepting others.

So far, the Eagles have scored 169 points, while giving up 49. After four games, that's an average score of 42-12. Eagles coach Nick Ruscetta commented on why a small-enrollment school like SFC not only wins against larger schools, but does so in dominating fashion: "Great kids. It's definitely the system fits the kids, the kids have played together, really good coaching, Coach Sipe left a good legacy here and we're just rolling on."

Coach Ruscetta was referring to none other than Brian Sipe, who played several years in the NFL and was the head coach for eight years at SFC before becoming quarterbacks coach this year at SDSU. He is credited with installing the schemes that have allowed SFC to be so successful. One interesting irony: Sipe played high school football for Grossmont.