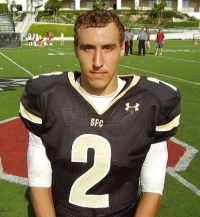 (SOLANA BEACH) - At a private, religious K-12 school like Santa Fe Christian, it's a given that  students are well-versed in the story of David and Goliath. What's doubtful however, is that those who taught that story expected its lessons would be applied to the high school football program.

According to the CIF, SFC has an enrollment of 357 students in high school, while Monte Vista has 2,001, a ratio of almost six to one. Conventional wisdom suggests that when two such schools face off in competitive sports, the school with the larger enrollment is supposed to win--and that when the difference in enrollment is this enormous, athletic competitions are supposed to become routs.

You can throw out conventional wisdom when you talk about SFC. Only 28 students are out for the team and only three, according to their program, weigh 200 pounds or more. In Saturday's game it was SFC doing the routing as the Eagles defeated the visiting Monte Vista Monarchs, 42-6.

SFC's success in spite of the odds is due to many factors. The low number of players dictates that many must play both offense and defense and be well-conditioned. The offense can best be described as a choreography of misdirection where all players must be in the right location at the right time, so discipline is critical.

The Monarchs had to feel that this just wasn't going to be their day. An illegal block penalty by SFC on a Monte Vista punt pinned the Eagles deep on their own three-yard line. On the very next play, Sam Hoekstra ran for a 97-yard touchdown run, the second longest play in school history.

"In the huddle, I told my teammates, 'We gotta drive down, get a touchdown'. It was just a basic sweep, I found an opening and ran as hard as I could," Hoekstra said about the play. He finished the game with 132 yards on seven carries. Earlier, Hoekstra was slow getting up after taking a hit in the tailbone, obviously not hard enough to slow him down.

Keaton Giannotti also had a solid day for the Eagles with two touchdown runs and a touchdown pass while Kurt Luedtke and Trent Von Yokes added touchdown runs of 55 and 52 yards respectively.

Big plays were few and far between for the Monarchs, but one bright spot was the play of Shervin Iraniha, who had three catches for 80 yards and one touchdown.

The loss dropped Monte Vista to 1-2. They visit Lincoln High (2-0-1) on Friday. SFC is 3-0 and will play another Saturday home game against an East County team, this time against the Grossmont Foothillers (2-1).

Scores from other East County games: